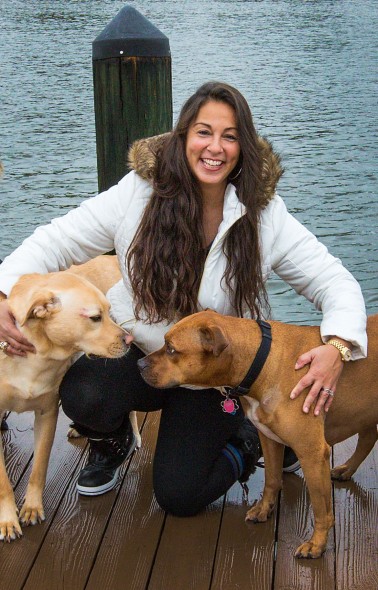 Bettina Cuce-Rodriguez of Virginia Beach is set to be put on trial for removing a dog that was chained up in a yard.  She and two others are being charged with dog larceny, because they wanted to free a dog that was a victim of abuse.

The incident happened in January of 2015.  The dog in question is one reported to have been left outside in all kinds of weather with no adequate shelter, and was also forced to go long periods without food and water.

Cuce-Rodriguez has a long history of dog rescuing.  In fact all four of the Cuce sisters have something to do with dog rescue in one form or another, so one might say rescue runs in the family.  So, when the news about the poor dog was brought to her attention, she couldn’t think of anything else to do but act naturally.  She had to rescue the dog.

She said that she had been in contact with local animal services, however there never seemed to be any action taken.  It’s not like she thought of going on to someone else’s property and steal a dog, but after feeling like she had exhausted every possible other option, she did what she felt she needed to do.

The trial is underway, and if convicted on the felony charges, she faces possible jail time and some pretty hefty fines.  What is more concerning to her is the way that she’s being vilified in the situation.  She’s being bashed on multiple forms of social media and blogs, being called an extremist and a vigilant.

The case has really fueled the debate between people that are willing to save any and every dog they come across, and those that believe that there is a line when it comes to this kind of thing, and she has most definitely crossed it.  There’s even a clear split in the dog rescue world regarding the subject.  How about you?  Are you willing to go to any length to save a dog you feel is in need, or is there a clearly defined line that simply must be observed, and never crossed?  Share your comments with us below, or on our Facebook page.