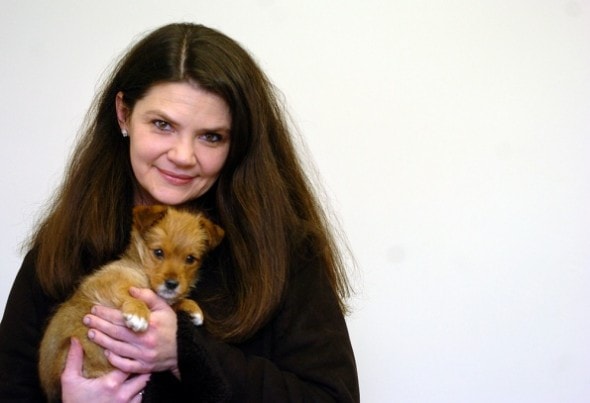 Arleta Vakane was walking over the Oxford Canal when she heard a crying noise and then spotted something in the water. She looked a little closer and realized it was a puppy fighting for her life. Vakane quickly came to the rescue of the puppy submerging herself in the cold water to save the puppy’s life.

Arleta Vakane strolled over the Oxford Canal in Banbury, England last week when something caught her attention.  “I heard this screaming, crying noise and when I looked I saw something moving in the middle of the canal,” said Vakane. “As I got nearer I saw it was a puppy paddling in the water and trying to keep her nose out of the water – everything else, including her ears, had gone under.” Vakane first tried to lie in the snow and grab the puppy but was unable to reach her. Knowing the puppy was just moments away from going under Vakane slid into the water.

Vakane successfully brought herself and the puppy out of the cold canal and rushed to her nearby employers. The puppy was then rushed to the Hawthorne Lodge Veterinary Practice in Banbury. Once there the puppy was put in an incubator and covered with blankets and heat pads. “She was shivering and barely conscious,” said veterinary surgeon Will Oldham. “She was so cold it took an hour-and-a-half to read her temperature. Given how could it was she would not have survived another few minutes in that water.” Oldham says the puppy is very luck Arleta was there to save her life.

The vet staff has nicknamed the puppy Canal and Chilly. The puppy has come a long way in the last week and if no owners come forward Vakane intends to adopt her. “Her eyes are so bright but when I last saw them they looked half dead. If I keep her I’ll call her Hope, because we all hoped she would survive.”