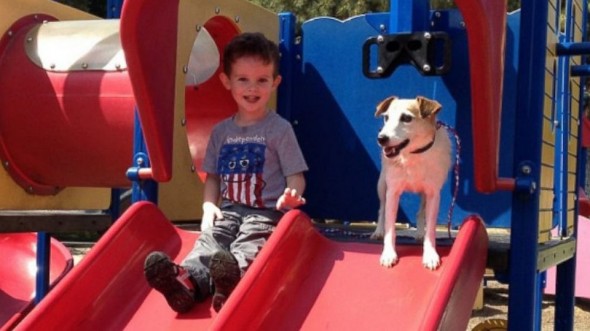 Tustin, California resident Karen Kelly is filing a whopping $1 million lawsuit against a veterinary clinic for threatening to have her arrested for animal cruelty because she could not afford a $10,000 surgery for her dog.

Karen’s terrier Mojo was struck and dragged by a car on July 31, 2011. She rushed him to Advance Critical Care and Internal Medicine to save his life. Initial treatments cost about $1,300, and she was told he required an operation immediately, but “there was no guarantee that Mojo would survive the surgery.”

Veterinarians explained it would cost $10,000, but Karen didn’t have anywhere close to that amount. She asked several friends to help, but none were able. She and a friend applied for credit at the clinic and were denied.

With no way to finance the surgery, Karen asked for her dog back so she could consult her regular vet. But they refused. She was given three options:

In order to take Mojo home, Karen was forced to sign a form stating that she was going against their medical advice and that they were “going to report her to the authorities for ‘animal cruelty,’ which is a crime,” according to her lawsuit.

Karen also did not have the $1,308 at the time. Again, she was “required to and forced to sign an agreement to pay said amount in full the very next day, or she would be turned over to collections.”

Karen would not be able to pay the following day either, but signed under duress, knowing it was the only way to keep Mojo from being held hostage.

The next day while Karen was at work, Orange County Animal Control left a note on the door, informing her they were conducting an investigation of animal cruelty on her. They later dropped their case after, according to the lawsuit, Karen had “already been put through severe stress and emotional distress.”

San Francisco attorney Corey Evans said under the California Veterinary Medical Practice Act, an owner’s legal obligation to provide medical care to an injured pet depends on the situation. Allowing them to suffer may be considered animal cruelty, but a vet cannot just hold the animal if the owner would like to take the dog to another facility. State law requires vets to report animal cruelty if they have “reasonable cause to believe an animal under its care has been a victim of animal abuse or cruelty.”

Besser is investigating individual veterinarians from the clinic, which was bought and renamed by new owners in 2012. Dayna Zane, the veterinarian on Mojo’s record (who no longer works there), will likely be listed, but the lawsuit will not be served until all defendants are named.

Though it is unclear what minor treatments he may have received, it turns out that Mojo did not undergo any surgeries, and is alive and well today.

Some might grumble, “well, she shouldn’t have a dog if she can’t afford it!” However, not everyone has $10,000 just sitting around in case of emergencies. They’d like to, but it just isn’t possible. What is possible is giving animals the best homes and lives with what they have. Telling poor people they simply shouldn’t have pets is, for many, akin to saying poor people shouldn’t be allowed to have children. Being poor is hardly ideal, but thousands of animals have been saved from abuse and euthanasia and are living well in poor homes.

The problem is not about being poor. The problem is that most veterinarians do not offer payment plans. They want cash or credit on the spot, as if everyone has credit cards with unlimited funds. How many animals are forced to be put down every year because the vets’ policy is “all money up front or none at all?” It’s time for a change so pets and their owners don’t have to suffer because of outrageous veterinarian fees and policies.