When it comes to animal abuse, technology and social media can be seen as both a blessing and a curse.  On one hand, we’re exposed to a great deal more horror than we would be without them, but on the other hand, it’s because of these innovations that we can band together and help stop abusers in their tracks.

It’s easy for us to play keyboard warrior and wish the torture of a thousand flaming swords upon abusers because laws are too lax and we long for a more Hammurabi-style system of justice, but it takes a far more enlightened mind to want to go even further for these troubled souls and help them.

That’s exactly what Randi Carter of Wichita, Kansas is aiming to do.  She’s the owner of All Dogs Bark-N-Play, where she trains dogs, and she’s also a board member of the rescue group Beauties and Beasts.  She knows that abuse happens far more than most people are aware, and that it’s typically occurring right under our noses.

On Sunday she was patrolling one of the neighborhoods that she sees many abuse cases coming from when she saw a young man, around 15 years old, who appeared to be a little rough with the dog he was walking.  So she began following and filming him, and watched in abhorrence as the violence escalated.

Many people get upset by such videos, not only because of what’s being recorded, but also because someone is recording and not doing something to stop what’s unfolding, just for the sake of a making a video that will be viewed by thousands.  Those in the rescue business know that sadly, sometimes they HAVE to let scenarios play out so they will be armed with sufficient evidence to bring to police.

But Randi didn’t just film the teen and his companion – she approached him and told him that she had recorded what he had just done.  She then laid out a proposition for him:  release the dog into her custody or she would call the police.  He refused, so she called the Wichita Police Department and posted the video on Facebook.

Randi continued to follow the boys, who circled the block, determined to not let her know where they lived.  She stayed on the phone with police, who advised her that this was not a good idea, as she was likely to wind up getting herself shot.  But Randi told them she knew the risks.

One of the boys got on his phone, and within moments a black SUV pulled up and they all piled in.  The driver lowered her window and asked Randi what was going on.  She told the woman that she had just seen and recorded one of the boys punching and kicking the dog.  The woman glared at the boys, then looked back and Randi and said, seething, “My son punched and kicked the dog?!”

She drove away before Randi could get any kind of information about them, but the mother actually reached out to her when she saw the video.  The woman, who we’ll call Ms. J, left her number and asked Randi to contact her, which she did.

When Randi called, Ms. J asked her to pick up the dog, whose name is Dragon, as she was going to work and didn’t want to leave him alone with her sons.  Randi was taken aback; it’s not every day that someone turns in their family member AND surrenders an abused dog.  She wasn’t sure how to proceed, as this very well could have been a trap.  She called the police, and was told that they had also been called by Ms. J, and that they were going to pick up Dragon.  Lt. Joe Schroeder asked Randi to come with him to identify the dog and his abuser.

When Randi got to the house, the boys avoided looking at her, but their mother commanded them to sit, and they did.  She asked what was going on, and Ms. J told her that they had just gone through some family troubles the night before.  Randi could tell that he wasn’t a bad kid, and it was now clear that he was taking out his built-up negative emotions on his dog.

Ms. J told her that the boys wanted a dog, so she had gotten Dragon for them, but she refused to allow him to be treated poorly.  She said that in their neighborhood, pit bulls are quickly killed, and she wanted to give him up so that wouldn’t happen to him.  Randi wanted to do more than just that, and spoke to the young man.

By posting a video showing his face, she knew he was being blasted on Facebook.  But she didn’t want to leave things that way.  She wanted to help him, and explained her story to him.  Randi has gone through her share of hardships, but she made active decisions to improve her lot in life, and so could he.

Randi told him that she can make $100 an hour training dogs, and that she’s got eight of her own, all of whom listen to every command she gives, and they even know non-verbal ones. 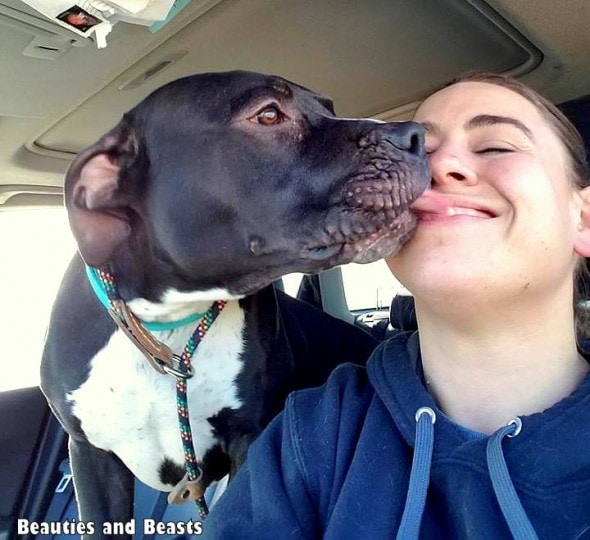 “You know how I did that?” she asked him.

“You made them,” he responded.

She offered to show him how to train dogs.  She told him that she wouldn’t do it because she was making him – he had to want to do this.  So now on Sundays, she will be spending her one day off a week teaching this young man the proper way to train dogs.

“Guess which dog you’re going to train first?” she said to him.

That’s right.  Dragon is now in the care of Beauties and Beasts, and when Randi was asked if Dragon would be going back home with him once they completed their training together, she said no.  Another lesson for him to experience will be give him to a better home.

Randi is currently working on getting a handful of community programs going, because an ounce of prevention is worth a pound of cure.  She’s trying to initiate a spay and neuter program, and is going to schools to teach kids how not to get bitten and how to treat dogs properly.

“That’s why I go in the schools, I love it, I absolutely love it…. I’m really, really proud of our rescue,” she said, noting that Beauties and Beasts is the only rescue group in the area that even takes on big dogs, all of whom are trained by Randi.

We will have an update for you within the next couple of months on how the teen’s training is going. 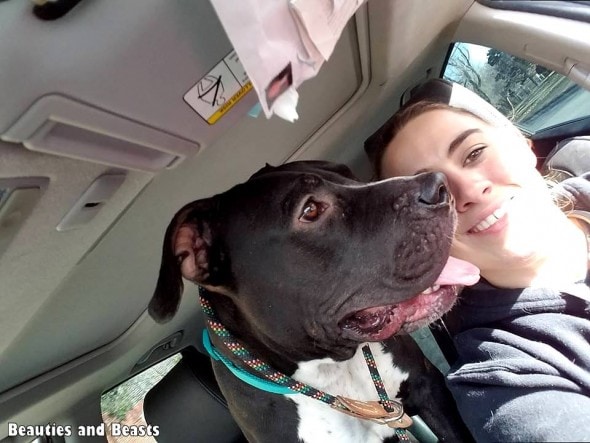