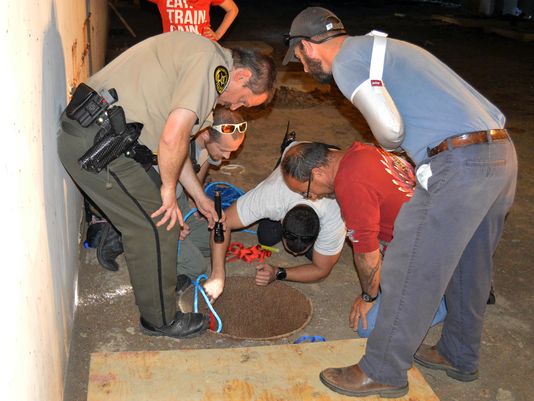 A man by the name of Matt Mountie of Charlotte, North Carolina was working with a crew installing some solar panels when he heard a strange noise off in the distance.  He wasn’t sure at first, but it sounded like cries for help.  After getting through a hole in a fence at an old nuclear power plant, he discovered a dog was trapped in a 30-foot deep hole in the ground.

The hole was about the size of a standard manhole, and was filled with water.  All that could be seen was the dog’s head poking out of the water below.  Mountie got on the phone with the Hawkins County Central Dispatch, and they contacted the local humane society.

The humane society thought they might send a couple of people down the hole on ropes to rescue the dog.  However, once Assistant Chief Curtis Winegar with the Kingsport Lifesaving Crew arrived and assessed the situation, he thought that it would be safer if two of his people went down instead, using the proper safety gear. 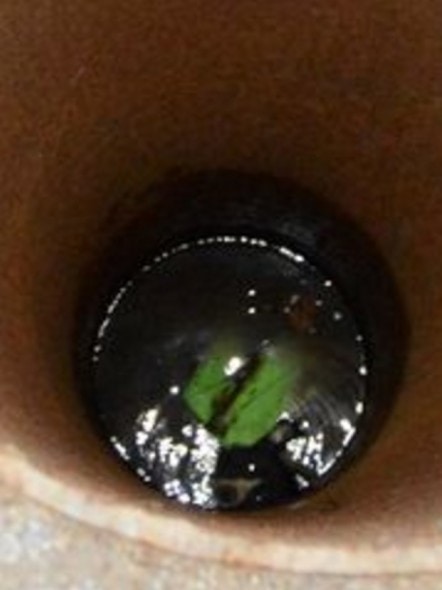 The problem was, the longer they waited, the more difficult it was for the dog to keep his head above the water.  They wanted to set up a proper tripod, and get all of the other safety gear ready, but time became an issue quicker than anyone had thought.  The dog’s head was starting to dip below the water level, and Winegar knew he had to act fast.

“We had initially contemplated using a rope and a noose to lift the dog out — kind of hook the dog with the noose and pull him out of the hole — but we were afraid that we would cause injury to the dog,” said Winegar.  “Over the last 30 minutes, the condition of the dog deteriorated quite a bit.  We were all in agreement that we didn’t have time to rig a confined-space rescue, so we went to the backup plan and noosed the dog out.  He was uninjured.”

It may have taken a considerable amount of time to get the dog out, but the rescuers eventually did manage to do it.  He was then taken to an animal hospital for further evaluation.  At this time, the dog is listed in stable condition.  He is expected to make a full recovery.4