If you saw an emaciated dog with a chain embedded in its neck, left outside in the freezing cold, you’d do what you could to save it, right?  That’s what some animal lovers in Washington state did, and the Humane Society of Tacoma just put her right back into the hands her abuser and said animal control is investigating.

A neighbor took photos of Kiki and posted them and the Tacoma, WA address on Facebook, and a small band of vigilantes decided to rescue her.  What they were planning is against the law, but if laws aren’t just, it is up to people to do something about them.

“The dog was clearly starving and in really bad shape so we got a group of us and go over there,” Autumn Niesz-Ramos told Fox13.

Four people entered the property of Steven Lee Jr., whose father is the owner of Kiki.  They found the poor girl chained to a dog house, which unfortunately is legal in Washington.  The group cut her chain and carried the dog away. 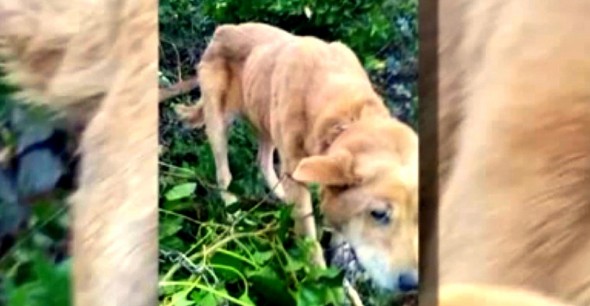 “The dog could barely stand up she was so weak,” Autumn said. “She was shaking, she was so cold.”

Kiki’s tight chain had become driven into her skin, and the crew brought her to a veterinarian.  They weren’t trying to break the law, but something had to be done for this dog.

She was turned over to the Humane Society for Tacoma and Pierce County, who gave her back to her owner.  They are legally required to, unless there is a warrant or they believe the dog is being abused.  Could they really not see that this dog was being abused?

“We are very concerned about Kiki, too. Her case is under investigation by Animal Control, and we are working with them to be sure Kiki gets the care she needs,” Aubrey Clement told me.  “By law, we cannot refuse to return a pet to its owner. We do, however, report cases of neglect and cruelty, and work closely with Animal Control to be sure they are investigated.”

Hopefully that is the case, and we sincerely hope Kiki’s family will be taking care of her.  At least now the spotlight is on them and animal control.

“I don’t think I stole her, I think I saved her,” Autumn said.

We do not advocate stealing dogs.  As well-intentioned as it is, theft is a crime in every state, and sadly, dogs are only considered property to some.  Do what you can legally – get photos and videos, speak to the owner, put food, shelter, blankets, water, straw, etc. out for the animals in need.  Know the laws in your state and town, and make sure you are courteous with police and sheriffs.  Keep on them and make sure they know what the laws stipulate, too.  “Adequate” shelter means that animals are to be protected from heat, cold, and other inclement weather.  It might be legal to keep animals tethered, but not when it threatens their well-being.

676 thoughts on “Would You Steal a Dog to Save Its Life?”