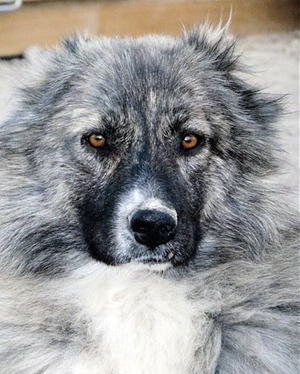 Wylie has been to hell and back.

The stray was rescued in war-torn Afghanistan recently after a harrowing ordeal. Locals captured him and forced him to fight another dog: he was nearly killed in the bloody match that saw him fighting for his life. His muzzle was slashed open, he had his tail, penis and ears cut off, and he was then thrown under a moving car. By all rights, the battered dog should have died.

Wylie’s luck took a major turn when he was found by the British soldiers who managed to rescue him. They brought him to the Kandahar airfield to be examined by Australian Federal Police agent, Narelle Jensz. Jensz had arrived from Gundaroo and was in Afghanistan to use her veterinary science skills to treat injured dogs.

Jensz and a team of US army medical staff treated Wylie and managed to nurse him back to health over a long period of time. And then she fell in love.

“Wylie has the ability to win you over without even trying,” she said. “For a dog who has endured so much at the hands of humans, there is no malice or aggression, just forgiveness. He is a survivor”.

Jensz said Wylie was an inspiration to soldiers serving in a hostile war zone. “He had become the symbol of hope and strength to so many. Wylie is a pivotal part of my life and my experience in Afghanistan because of what he represents and the efforts of those around him. Its a bond stronger and more profound than most”.

Wylie is now in Britain completing a six month quarantine while British dog rescue charity group Nowzad Dogs attempts to raise funds to get him to Australia. See nowzaddonations.chipin.com/wylie to learn how you can help.

Jensz says she can’t wait to welcome Wylie home. “I’m looking forward to giving him the biggest hug in the world and reminding him people are not about to give up on him,” she said. “The next step is to introduce him to grass and the rolling waves of the ocean”.

14 thoughts on “Wylie’s Fight for Freedom: A War Dog’s Journey”