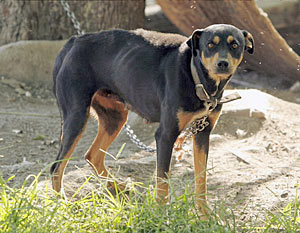 In two distinct York counties, one in Pennsylvania, the other in South Carolina, laws are being enforced that will prevent dog owners from keeping their pets tethered outdoors.

York County, PA now has six municipalities that have made tethering illegal.  This is not the kind of tethering wherein a person leaves a dog strapped to a pole while they pop inside a store for a cup of coffee, but the kind where a dog is left leashed up outside for hours at a time.  Current PA animal cruelty laws allow dogs to be chained up around the clock, provided they have access to food, water and shelter, and the tethers are of a specific length.

But this does not guarantee the canines’ comfort.  Should a dog be left outdoors in the winter, it is likely their food and water will freeze.  The shelter must be adequate.  Does the law stipulate that the shelter be weather appropriate?  If laws are not clear, they may not be followed.  Owners must also be careful how their animals are chained.  A dog may choke to death if they continuously wrap their tether around a tree.

Now in both Pennsylvania and South Carolina, York counties have made it so dog tethers must run on a cable system.  This allows dogs to romp around and get exercise, which at the very least breaks their days up a little.  Otherwise they must be kenneled.

Studies have shown that tethered dogs, particularly those who receive little attention and socialization, are far more likely to attack.  But not using chains can be helpful to everyone, including the dogs who would be on them.  Shelley Metzler, West York, PA dog enforcement officer said she’s seen tethered dogs seriously injured by dogs running loose.

These measures may not be popular with all dog owners.  York County, SC veterinarian Sonya McCathey stated, “‘Athletic, heavily muscled dogs” who have the ‘tools’ to harm humans become dangerous when they break their chains or restraints.”

This sounds like it may be targeting pit bulls and other demonized dogs.  While the breed has been dubbed “baby-killer” due to a number of incidents involving attacks on children, they have been badly stereotyped.  Pit bulls are highly capable of being incredibly friendly and good-natured.  Typically, it is only when raised in harsh conditions that they become vicious.

“Owning that type of dog should have restrictions, just as owning a pool does, McCathey said. “Pool owners might not have children themselves, but they must put up fences to help keep kids from drowning.”

McCathey’s sentiments have not been shared by everyone.  Challengers to the stricter regulations have displayed signs saying, “How about regulating your hobby?”

McCathey insists the stricter laws are due to complaints against dogs and their owners, and that as long as owners control their animals, they shouldn’t have any problems.

SC resident and registered veterinary technician Ashley Nicole lives on five acres of farmland in York.  She has several well-cared for pit bulls, some tethered and some kenneled.  In 10 years, not a single one has escaped.  She worries that people who are unfairly biased against and afraid of pit bulls will always have complaints about them.

McCathey said that breeds associated with pit bulls would not be outlawed with the new restrictions.

York County, SC Council members have yet to vote on the proposed regulations, but most seem to be in favor of the changes.