The average male golden retriever weighs between 65 and 75 pounds. But when Newport Beach Animal Control officers answered a call about a dog dumped on the beach they were surprised to find one who was more in the ballpark of 120.

The dog they called Henry, as cheery and friendly as any golden you might know, was carrying a 46-pound tumor on his side. “The growth was pushing on his right leg, which kept him from doing normal dog things, such as lifting his leg to go to the bathroom,” Valerie Shomburg told L.A.’s KTLA 5. Shomburg is the Newport Beach Animal Control supervisor. 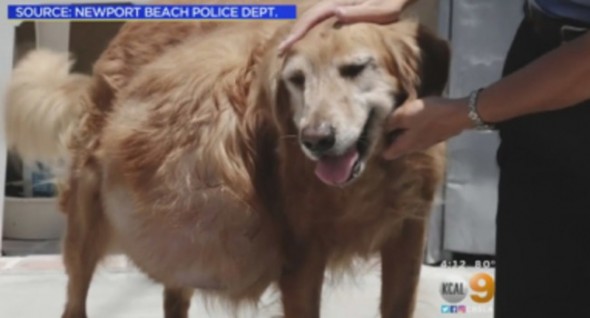 “Most vets that we asked, and have been involved in his story, have never seen [one] that big,” Schomburg said of the mass.

Although complications were possible, Henry was deemed strong enough for surgery, and thanks to the donors who helped raise the thousands to cover the procedure, Henry is now on the road to recovery.

“He has too much love, and life to live,” said Shomburg. “We wanted to give him a chance.”

Although no one is sure how long Henry suffered with the weight of the growth, those involved believe he was someone’s pet at one time. Investigators are following up on leads to determine if this is a case where charges such as animal cruelty or neglect could be filed.

“Just very shocking that it got that big, and that someone wouldn’t do the right thing,” said Schomburg. “Whoever did this to Henry might have to answer it.”