His own snoring woke him up and I cannot stop laughing pic.twitter.com/wBV4rELESw

Ohio resident Alexis Waclawski, 20, shot a quick, funny video of her rescue dog, Moose, last week, then posted it on social media to amuse her friends. Then she went to bed.

Her posts, she told the Toledo Blade, usually get 20 or so likes. Maybe a few retweets. But when she woke the next morning, she was shocked to see the “likes” at 300. By Sunday, that number had mushroomed to 75,000 with more than a million views.

The video, which features the sleepy mixed-breed snoring — then jolting himself awake — had made them both Internet celebrities of sorts in a matter of days.

“I guess it’s relatable, because a lot of people wake up in their sleep or wake up like that when their alarm goes off,” Waclawski told the Blade. “Everybody loves dogs, so that obviously helped it too.”

It’s been overwhelming — so much so that she’s had to turn of notifications. She and Moose have gone global. They’v e generated funny memes, including one where a friend compared her “management” of Moose’s fame to that of Kris Jenner (a mother who manages her own famous family, the Kardashians). 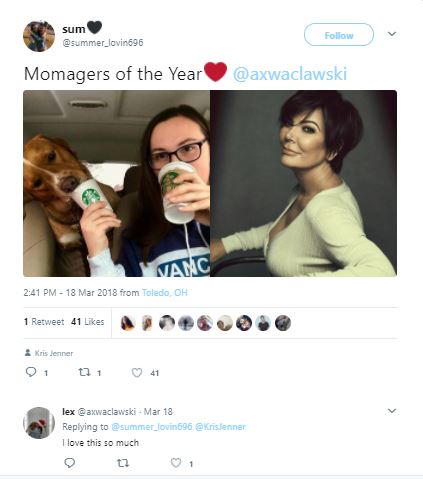 Moose was rescued last summer from a local humane society and now, after completing a six-week training course with his family, is Waclawski’s registered emotional support dog. He aids the 20-year-old student with anxiety and depression.

“They’re in a really good relationship. I think [the classes] really built Alexis’s confidence, and what a difference it can make in a dog’s life too,” said Carol Humberger, a dog trainer at Oregon’s A Promised Friend.

Moose’s history, as with many rescue dogs, is mostly unknown. Experts put his age at about 2 and Waclawski says getting video of him sleeping was nothing shocking; she says he’s pretty lazy.

She also hopes this unexpected fame can lead to something more important: conversation about mental health issues. She also hopes more people adopt from shelters, because they are full of dogs that can help people with their own issues, just like Moose.

“He makes me smile all the time, that’s why I got him in the first place,” Waclawski said. “Now I guess he’s making literally millions of other people smile too.”