Update (6/1/12): This afternoon the Wellington SPCA presented a Bravery Award to Damon Boyer-Marwood, during his school assembly at Brandon Intermediate in Cannons Creek. Damon has made headlines around the world after he bravely rescued a terrier dog named Rose from being beaten by a group of youths last week. Damon also received a Mayoral Commendation from Mayor Nick Leggett. 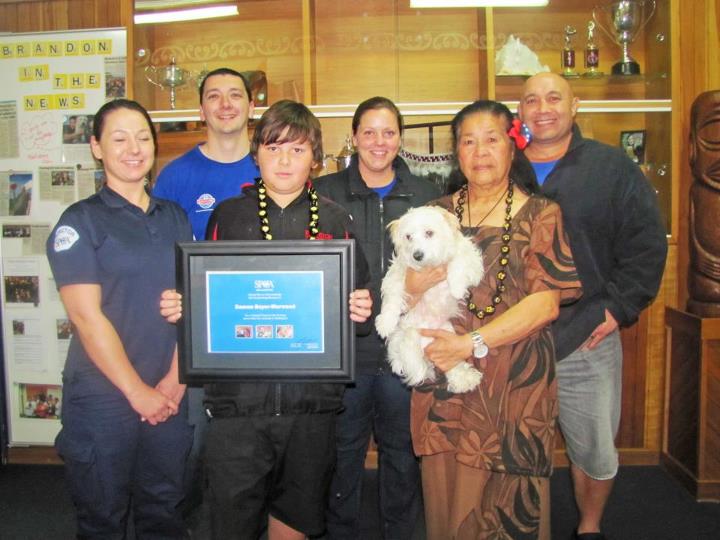 The Wellington SPCA says it intends to honor a 12 year old boy with a bravery award for coming to the rescue of a dog that was being attacked by a group of schoolyard bullies. Damon Boyer-Marwood, 12, was walking home from Brandon Intermediate School in Cannons Creek on Thursday when he heard an animal cry. Moving closer to the sound, he found a group of children holding down a small female dog and taking turns kicking it. They also took turns beating it with a cricket bat.

Infuriated by what he saw, the brave child stepped in and told the group of boys to leave the dog alone and go away. At first they resisted, but his conviction was such that after a brief standoff, they released the dog and fled. 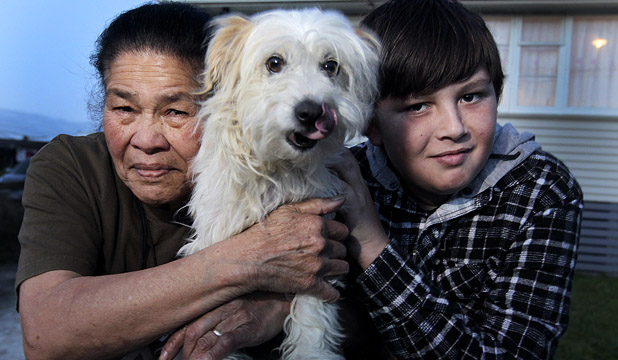 “They stood there for a bit, then they ran inside,” he said.

Damon took the battered dog to a friend’s house before calling the SPCA to try to identify an owner. A microchip scan turned up a name and address, and the dog was returned to owner Sosefina Leota yesterday. She insisted on meeting the hero who saved her dog, saying “I want to thank him from my heart, I want to know his face.”

Damon’s grandmother, Jenny Marwood, is proud, and says the kind-hearted boy saved the dog’s life. “It makes you wonder what would have happened if he didn’t step in.”

In a written statement, Wellington SPCA inspector Kaycee Polkinghorne said an investigation is underway. “Because of the ages, there’s not a lot we can do prosecution-wise, but it does reinforce the importance of having education in schools about things like this. You just have to to wonder what’s going on to make them think this is acceptable behavior.”

Polkinghorne praised Damon for his moral fortitude, and said that he hopes others will follow his example.  “I just hope there are more kids out there who are willing to stand up for what’s right and not be afraid to say it.”