Humane Society International/Canada worked with the Quebec Department of Agriculture, Fisheries and Food with the mandate of ANIMA Quebec to rescue more than 125 dogs from a commercial breeding operation in the Chaudiere-Appalaches region, located south of Quebec City.

The seizure followed an inspection by authorities, in which numerous infractions were observed in regards to the security and welfare of the animals. 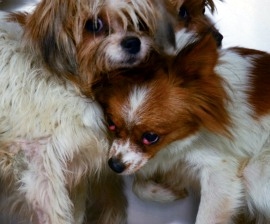 “The HSI Animal Rescue Team assisted the Quebec government in removing and transporting more than a hundred neglected dogs from a commercial breeding operation in Quebec,” said Rebecca Aldworth, executive director of Humane Society International/Canada. “The dogs and puppies were living in conditions that did not permit them to receive proper care.”

HSI Canada and the MAPAQ promptly transported the rescued dogs to an emergency shelter in Quebec, where they will receive care, food and veterinary treatment.