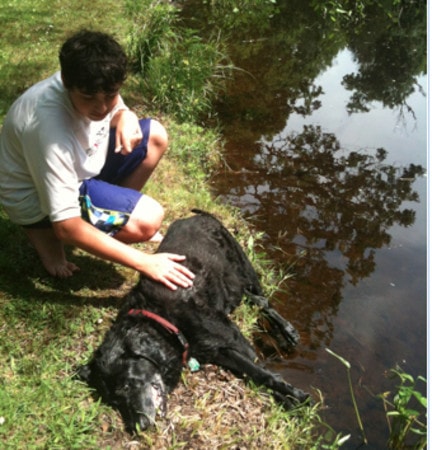 Nadine Koobatian, Casey’s owner, says she went for a swim and became confused and exhausted.

“In a frantic attempt to reach shore, she misjudged and instead made her way out to the center of the pond. Unable to swim further, she frantically thrashed and then succumbed to the water,” Nadine Koobatian says. “John, watching with his family and friends from the shore, realized that Casey was drowning and her owner was not able to swim out to rescue her. Without hesitation, John swam out to rescue Casey.”

After bringing Casey safely to shore,  John can be seen comforting her in the picture above. “She was treated at Killingworth Veterinary Hospital and released in good condition,” Nadine Koobatian said.

John’s proud mother says her son was in the right place at the right time.

“John is a strong swimmer and avid sailer who has spent most of the summer either on or in the water. We were also prepared to go in after John if we needed to,” she said. “The dog’s owner appeared to be in his mid-70s. He was clearly distraught and there was no way he could have gone in. John definitely saved the dog’s life. We are very proud of him.”