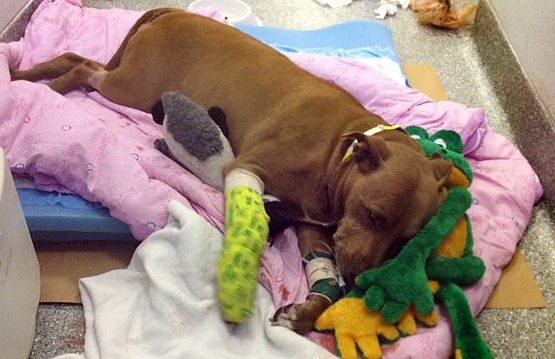 An eight year old pit bull has been recovering in the care of a Massachusetts animal hospital after conducting a remarkable rescue mission in May of this year. According to witnesses, the heroic dog saved the life of her owner just before she was hit by an oncoming freight train.

The Massachusetts SPCA said Christine Spain of Shirley was walking home with her dog Lilly when she collapsed on the tracks. Spain’s son, Boston Police Officer David Lanteigne, says a train’s engineer watched in amazement as the dog moved her owner out of harm’s way. Traveling at a high rate of speed, the train was unable to come to a stop, and Lilly was hit seconds after saving Spain.

“The engineer said as he was coming up, he saw the dog pulling her off the tracks. But there wasn’t enough time,” Lanteigne said. “He then saw the dog come around between the train and my mom and take the hit of the train.”

That heroic deed came at substantial cost: veterinarians were forced to amputate a badly mangled leg that was beyond repair. Lilly also suffered a broken pelvis, but remarkably, she is starting to bounce back. While receiving treatment for her injuries, the brave dog has been showered with letters of appreciation as news of her story spreads. ‘Jake the vet’ recently checked in on her progress, and offers an encouraging report in a new video released today.

0 thoughts on “The Rehabilitation of a Hero Dog”