When families are looking for a dog to add to their family, they often look for puppies or younger dogs, leaving the older dogs to spend the remainder of their days in limbo. However, older dogs are abandoned far too frequently, often due to a simple health condition that the family did not want to address. 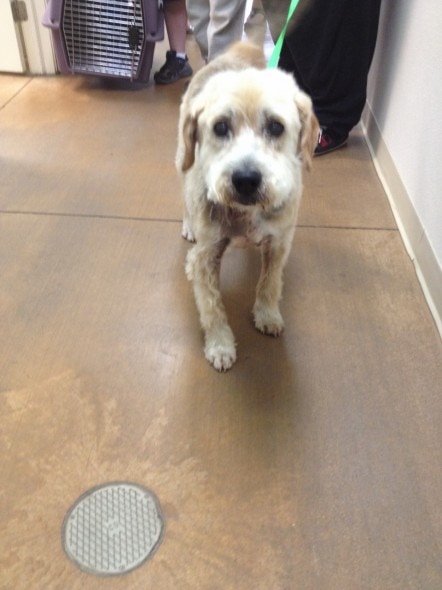 Such is the case with Finn, a sweet, 15 year old Wheaton Terrier. Finn was found by a father and son who were fishing in Northern Illinois and discovered a dog that looked like it needed immediate care. They asked TAPS (Tazewell Animal Protective Society) Shelter (www.tapsshelter.org) if they could bring Finn in. TAPS was, of course, happy to help Finn.

When he arrived, it appeared that Finn had been neglected for quite some time.  TAPS found a microchip indicating that Finn had a family, so a call was made to his owners. Sadly, the owners explained that they had recently rehomed Finn “free to a good home” on Craigslist because a dog no longer fit their lifestyle.

Unfortunately, the new owners did not prove to be “a good home” and had dumped him along the river and did not want him back. TAPS chose to take Finn in, hoping that he would be adopted. When the vet examined Finn, a cancerous growth was found on his neck that needed to be removed. It had likely been missed or ignored in all of the neglect that Finn had been through.

Once the growth was removed and Finn was doing better, TAPS placed him up for adoption in the hopes that a truly loving family would be willing to take in an older dog.  Within a week, a great family walked in and fell in love with Finn. He is now spending his final years in a loving home with a family that is willing to care for him.

TAPS (Tazewell Animal Protective Society) Shelter (www.tapsshelter.org) is a no-kill shelter of hope for hopeless animals, located in central Illinois. The shelter has been in existence since 1958, working to rehome dogs and cats in need. In 2012, TAPS rehomed 962 animals and they are on track to adopt out over 1,000 in 2013.