Borko’s story is like too many other dogs around the world. In many countries, dogs have no protection from those who harm them and police may even reward abusers. It is only by raising awareness of their plight and telling their stories, such as Borko’s below, that pressure can successfully be placed on authorities in offending countries.

Borko lived a sad life as a neglected stray in his homeland of Bulgaria, a country in Eastern Europe. Borko and other strays are looked upon as vermin in Bulgaria and are abused and detested as a result. When Borko was only a puppy, a mob of villagers attacked him, beating him so badly that they snapped his spine and he was paralyzed. 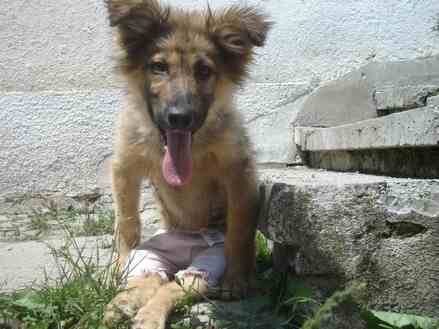 Thankfully, Dr. Georgi Litov and his family took Borko in and began to look after him. The family helped make sure he was safe and cared for even though he now had to wear diapers and could not use his back legs anymore as a result of his spinal injury.

Because of their compassion, Dr. Litov and his family also took in other strays to join Borko. Soon after, Dr. Litov received death threats for his work with stray dogs and Borko was attacked again by a local lynch mob in Selcha, Bulgaria. Anti-stray dog protesters arrived at the Litov’s home with a mob and a film crew and Borko was attacked in his own home and beaten with a stick, while the mob filmed his pain for their own purposes. Since Borko’s back legs don’t work, he could not run away, leaving him to just cower in fear.

There are many anti-stray dog protesters who want Borko and his loving family out of their neighborhood. The police were called when the mob arrived at the Litovs’ home, yet they did nothing. The government of Bulgaria has laws against such cruelty but they are doing nothing to enforce them and are instead allowing those who help animals such as Borko to be persecuted and removed from their homes.

Wetnose Animal Aid (www.wetnoseanimalaid.com) , an organization that provides assistance to those who rescue dogs around the world, are reaching out to the Litov family and to Borko. They are working to raise awareness of Borko’s story, as one of many similar stories in Bulgaria.

Actresses Lorraine Chase and Wendy Turner Webster are going to visit Bulgaria, along with their cameraman, to highlight the problems that these dogs are facing. In the meanwhile, dogs like Borko continue to cry out for justice.

Wetnose Animal Aid started in 2000 and provides needed aid to rescued animals and those who rescue them. They pay off vet bills and buy essential equipment for sick and vulnerable animals and especially focus on helping the smaller organizations or individuals that rescue these animals.

They also work to fundraise, raise awareness about animal issues and promote the highest standard of animal care possible.

11 thoughts on “Justice for Borko”