The Humane Society of the United States’ Animal Rescue Team and other area organizations were called in by Stokes County Animal Control to assist in the rescue of more than 150 dogs from a Danbury, N.C., property.

The Stokes County Animal Control served a search and seizure warrant on the property Tuesday morning and found that the dogs were being housed in unsanitary conditions and lacked proper socialization and medical care.

The owner has surrendered all of the dogs to the Stokes County Animal Control. 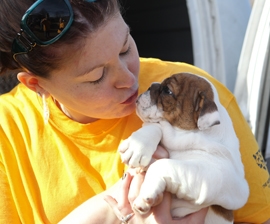 “Many of these dogs were living in filthy cages so small that they could barely stand up and turn around. The conditions these dogs were housed in demonstrates why North Carolina must pass legislation regulating these breeders,” said Kim Alboum, North Carolina state director for The Humane Society of the United States. “Large-scale breeders in our state currently face no regulations or routine inspections. These lax laws have made North Carolina a safe-haven for inhumane puppy mills like this one.”

Local law enforcement became concerned about this facility when the owner surrendered 11 dogs in very poor physical condition to the Stokes County Humane Society. When responders arrived on scene they found more than 150 dogs, mostly French bulldogs, chihuahuas and other small breeds, living crowded amongst their own feces in small wire enclosures. Many of the dogs were severely matted and suffering from a variety of medical issues. The property owner was selling puppies over the Internet to unsuspecting consumers.

“I can’t believe that something like this could happen in Stokes County, and I am relieved that we were able to come to the aid of these dogs today,” said Phil Handy, director of Animal Control for Stokes County.

The HSUS is safely removing all of the animals and transporting them to the Guilford County Animal Shelter. Responders from Stokes County Animal Control and Stokes County Humane Society are also assisting with intake of the dogs. Once at the shelter the dogs will be thoroughly examined by a team of veterinarians and receive any necessary medical treatment before being considered for adoption or placed in foster homes.