Was anyone else immediately reminded of The Beast?  (I know – he’s a Mastiff.)

Meet Hulk.  This pit bull is only 18 months old, and he’s already 175 pounds.  But don’t let his size or his name fool you – he’s a total mush.  That’s why his best friend is a three-year-old boy.

“I want to emphasize that we breed and train dogs who come in stable,” Marlon told ABC News. “Our goal is to make these dogs fearless for the intimidation factor that protection dogs need to have, not for them to be uncontrolled and maul or bite anyone. That is improper training.” 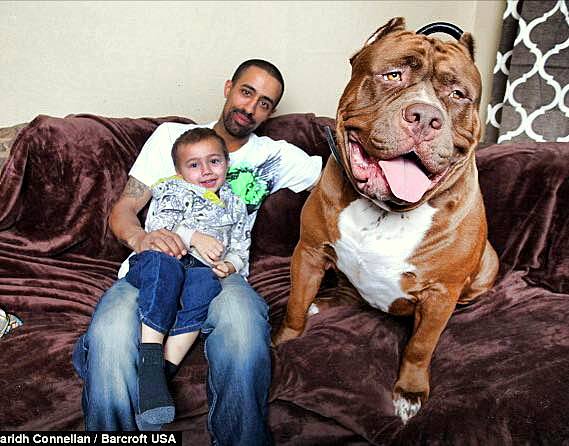 His and Lisa’s son Jordan absolutely adores his canine family member, and the two love coming up with music together.

“He’s a wonderful, excellently trained dog,” Marlon explained.  “He plays with my kid, he’s great with the family and he’s so, so sweet.”

Jordan even goes for short, supervised rides on the gargantuan dog, which isn’t advisable, because it can damage their backs, but it looks like Hulk can handle the occasional careful giddy-up while Jordan is still little.

“Because pit bulls are only in the media when bad things happen, this myth of them as monsters gets perpetuated, but it’s not true. They might not be for everyone, but under a good leader and with proper training, they make amazing family and work or protection dogs,” Marlon said.

“For the people who say that dogs just randomly flip out, they’re not paying attention, because that doesn’t actually happen.  You know, there’s something that’s going on throughout that dog’s life, that’s a constant, that he’s got to a breaking point or something like that.” 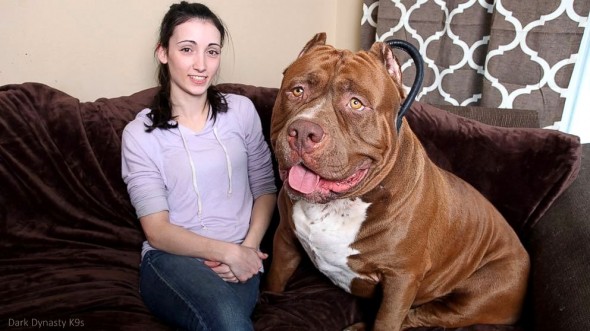 DDK and all the news reports so far say that Hulk is a pit bull, but he looks like he could have a bit of Cane Corso or Mastiff in him.  English Mastiff males can weigh between 150 and 250 pounds, which is much closer to Hulk’s size than the 25 to 100 pounds that the different kind of pit bulls weigh in at.

Molosser is a grouping of large dog breeds that originate from a common ancestor.  Some that fall under this category include Mastiffs, Cane Corsos, pit bulls, Newfoundlands, and bulldogs, so it isn’t far-fetched to presume that Hulk’s size is the result of his Molosser lineage.

Whatever the case, Hulk is one colossal dog.

“My hope is that we can stop ignorance and change people’s minds about pit bulls in a positive way with all this attention,” Marlon concluded. 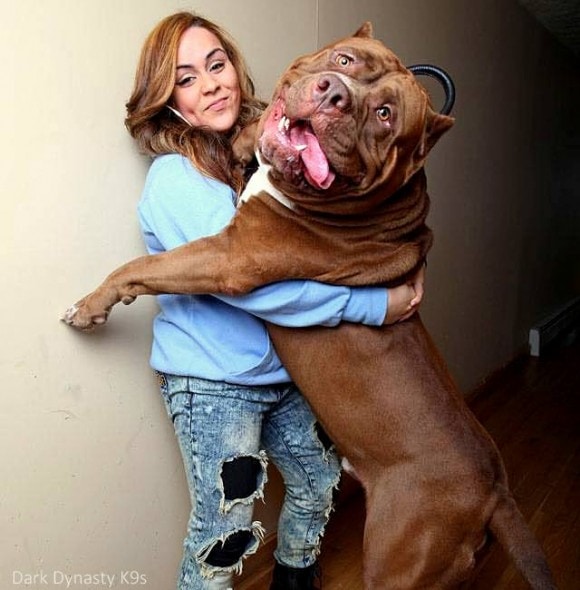 *At Life With Dogs, we do NOT encourage breeding or ear-cropping.  This writer is strongly against both, in addition to the concept of raising pit bulls to be guard dogs (though these dogs are trained similarly to police dogs).  They have a bad enough reputation as it is without there being people who make money breeding and training these dogs to attack anything other than a rope toy.  We would much rather focus on dogs’ positive aspects (though not ignoring their faults) and advocate for the decent treatment of all animals.  That being said, though I do not support Hulk’s family’s choice of profession, I do believe he is very loved and well-treated, which is always commendable and part of the reason why his story is being featured.