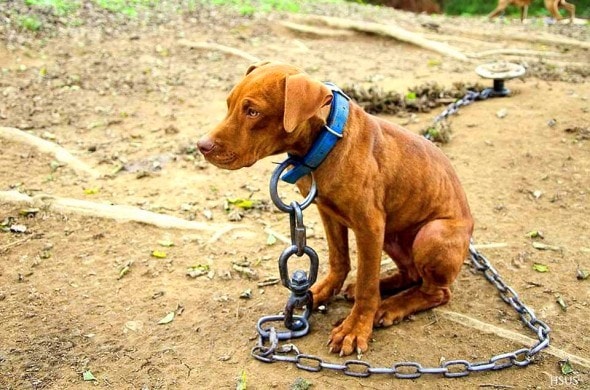 It’s a victorious day for animal advocates – the Nashville Metro Council has decisively voted to ban the tethering of pets outdoors for long periods of time or with heavy chains.

Last week a bill was passed to ban tethering, but a motion was filed to reconsider the legislation.  Another vote on Tuesday of 30-3 decisively trounced the proposal.

After the vote, Councilwoman Karen Bennett, who lead the campaign, celebrated outside of council chambers with supporters from the group Dogs Deserve Better.

“Turn around and hug the person next to you,” she said.

Now the bill is waiting on the desk of Mayor Karl Dean, who is expected to sign it into action.

Tethers that restrict movement are now banned in addition to chains that are “unreasonably heavy in proportion to the weight of the animal.”  People will not be allowed to tether dogs in extreme heat, cold, thunderstorms or tornadoes.

“These are just some responsible measures to put on tethering,” Bennett said, noting that chains are often used to up the strength of fighting dogs. “The chains themselves are restrictive. They actually rub the skin and cause damage. … Removing the chains is a huge piece of this.”

Some tethering is still acceptable, provided that:  the animal is at least 6 months old and in good health; there is a swivel at both ends to reduce tangles; no choke or pinch collars are used; the tether and running line are each at least 15 feet long; the animal has access to water, shelter, and dry ground at all times, and is fed adequately; multiple animals are tethered independently so they do not become tangled; tethered dogs may lie down comfortably in all positions.