A 13 year old dog missing for seven months returned home on Saturday thanks to a chance encounter at a Tractor Supply store. 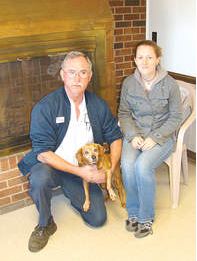 When Franklin County, Virginia resident Kelli Gusler stopped by a Route 220 Tractor Supply Store last Saturday on a day when the Franklin County Humane Society happened to be on site with an adoption event, she spotted a familiar face. That face belonged to Tinberbell, the family’s senior Dachshund mix, who had been missing for seven months.

Kelli told the Franklin News Post , “After seeing all the dogs at the store, I just had to go by and show them a little love,” she said. “There was a dog I thought looked a lot like Tinkerbell, but she was heavier and she had one of the fatty tumors on her hip.”

“When I called her name, her ears perked up and I started bawling,” Kelli said. “I called daddy and told him Tinkerbell was at Tractor Supply, and he came in a matter of minutes.”
“I could tell she recognized me and that was it I just started crying and lost it. I think everyone there thought I was crazy because I was saying ‘That’s my dads dog!’, I know that dog,” Kelli told a local TV station.

Kelli’s dad Terry Gusler raised Tinkerbell from the time she was a pup and searched in vain as weeks turned into months before concluding the the 13 year old ailing dog, who was never known to leave home, had gone off to die.

“This dog has been with me a long time,” Jerry Gusler said. “I got two kids, but she’s one of them. She’s the third one.”

When she went missing, “It was like losing a family member,” Kelli Gusler said. “It was really sad.”

Tinkerbell spent most of her days at Terry’s auto repair shop, where she and a cat who’d come to the shop as a kitten stuck in a fan belt became fast friends. Tinkerbell has visited the shop again as she rejoins he family and the old routines.

The Franklin County Humane Society kept Tinkerbell safe for months, without knowing anyone was missing her. Her foster family brought her to the adoption event. The humane society is thrilled that Tinkerbell found her family again, and noted at Facebook that people should keep checking with shelters and rescues when their pets are lost.

Accounts differ slightly between the newspaper feature and the KSLS story below. Tinkerbell is described as being either 11 or 13, and as being missing for 6 or 7 months. We’ve chosen to go with the information from the paper. Either way, a senior dog who’d been missing a long time is back home.