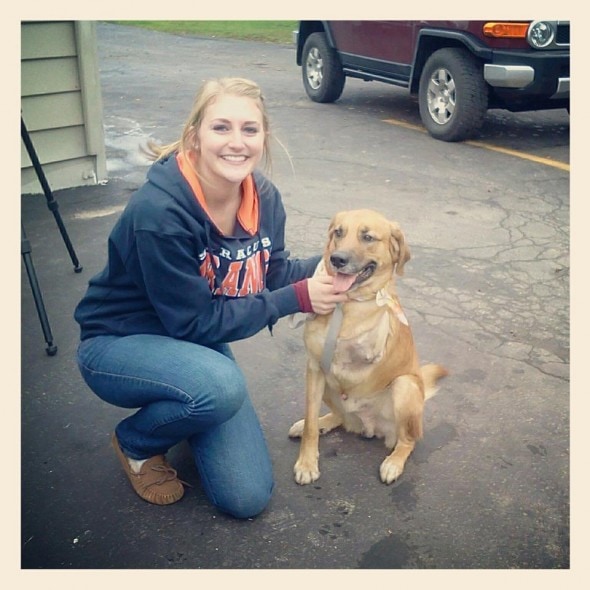 Last week a stray dog was found limping near the Prendergast Library in Jamestown, New York. The library workers were able to get the dog to a shelter where it was discovered the dog had been shot. The dog, now named Lucky, had to have his front left leg amputated, but he is recovering well and has already been adopted. Thanks to one library employee Lucky’s surgery has been paid for.

On Tuesday, October 23rd, the workers at the library noticed a Golden Retriever-Shepherd mix in obvious distress. They contacted Patty Bush who runs Pick of the Litter, a local shelter. Bush picked up Lucky and took him to a nearby veterinary clinic.

An x-ray showed that Lucky had been shot a while ago in the rib cage and front leg. Bullet fragments still remained and the veterinarian was surprised the fragments didn’t lead to a fatal infection. Lucky’s leg had to be amputated and he underwent surgery on Monday. Lucky is already recovering well and getting around on three legs.

One library employee took special interest in Lucky’s situation. Ashley Moran is a college student who works part-time at the library. She decided to start raising funds to help with the cost of Lucky’s surgery and care. She was able to raise enough money for his surgery in one four hour shift at the library. Moran received donations from other library employees, local businesses, family and strangers on Facebook.

Although Moran wished to adopt Lucky, she is regrettably allergic to dogs. Lucky has found a new owner fortunately and he will have a loving home once he is done recovering at Pick of the Litter.  Since Lucky’s wounds are old and there is no trace of his previous owner or anyone responsible for Lucky’s injuries, Animal Control cannot investigate Lucky’s shooting at this point.

Moran continues to raise money with the “Lucky and Friends” fund. She plans to keep the fund open until early December. All donations will go towards Pick of the Litter to help with expenses for all their animals, including Lucky. The fund will help pay for surgeries, shots, medications, food, treats, toys and anything else the shelter may need. If you would like to donate you can send donations to Pick of the Litter, 1808 E. Elmwood Ave., Falconer N.Y. 14733.

2 thoughts on “A stray dog found shot has been adopted”