Belfast City Council confirmed today that the dog Lennox, an illegal pit-bull terrier type, has been humanely put to sleep. This was in accordance with the Order of the County Court which was affirmed by the Northern Ireland Court of Appeal.

While there is an exemption scheme to which dogs of this type (pit-bull terrier type) may be admitted as an alternative to destruction, the BCC said there were no such measures that could be applied in this case that would address the concerns relating to public safety. The Council`s expert described the dog as one of the most unpredictable and dangerous dogs he had come across.

Over the past two years, Council officials say they have been subjected to a sustained campaign of abuse including threats of violence and death threats.

The Council said it regretted that the court action was necessary but emphasized that the safety of the public remains its key priority.

In what may be a sad final update, a Belfast court has ordered that Lennox be put to death. According to breaking news from the BBC:

Northern Ireland’s most senior judges rejected Caroline Barnes’ legal bid to overturn an order for the destruction of her pet, Lennox. The dog was seized by Belfast City Council dog wardens in May 2010. He was assessed to be a danger to the public and subsequently ordered to be put down.

The decision that Lennox should be put down came after amendments to the Dangerous Dogs Act were extended to Northern Ireland in 2011.

“The judge had heard evidence on the issues relating to this dog over a protracted two-day hearing, carefully considered the evidence and the issues and he reached conclusions of fact which have not been vitiated by any error of law on his part,” Lord Justice Girvan said. 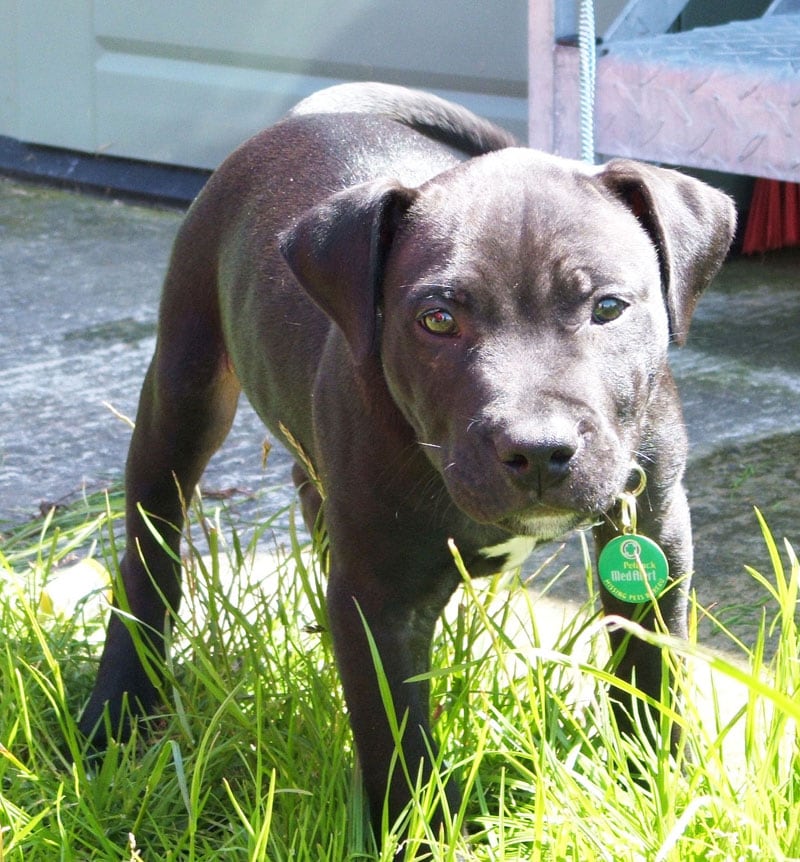 After months of hard work on the part of animal advocates across the globe, a judge has sided with the Belfast City Council’s assertion that Lennox should be put to death because he resembles a pit bull. (Note: this above was written in March of last year: sadly, it applies to today’s decision as well.)
[dcs_head top=”0″ color=”#000000″] [/dcs_head]

UPDATE (9-30-11): Victoria Stilwell said it best on her Facebook page today: “Shame on Belfast CC and shame on those lawmakers who support BSL. This has been and continues to be a canine witch hunt. Shame also on Peter Tallack, their so called expert who through his testimony demonstrated such a gross misunderstanding of dog behavior.”

The BSL fueled persecution of Lennox continues unabated despite widespread calls for a dismissal of the dangerous dog label. The Belfast City Council has ignored the public’s pleas to free Lennox, and a petition with over 100,000 signatures went unnoticed by officials in the case. County Court Judge Derek Rodgers upheld the original decision to execute Lennox, saying that he was a danger to those he came in contact with. Why? Because he happens to look like a pit bull.

This comes as a major blow to Lennox, his family and their supporters. When we asked you to get involved in March, time was on our side. Today, that is not the case. Depending on who you ask, Lennox has 2-3 weeks left before he is put to death. According to the BBC, “Belfast City Council have advised the dog’s supporters they have 21 days to lodge another appeal, if there is a point of law to do so.”

With that in mind, it’s only natural to ask what can be done. Start by sharing. A solid dose of public dissent is never harmful, and the greater hope is that someone with a solid understanding of British law will read about the case and find a loophole, or propose a new appeal that will stick. Sadly, it’s our last hope – and Lennox’s, for that matter.

Please share his tale of blatant persecution and join us in hoping that there is a legal expert out there who will find a way to save a misjudged dog before he is out of time. And should this effort fail, remember his tale of woe: there will be more BSL battles to address in the future, and the injustice suffered by Lennox and family should forever serve as an example of how not to handle similar situations.

Visit the Save Lennox fan page to offer your support. Please note that action items listed below can be disregarded: all previous efforts have fallen on deaf ears, and it’s apparent that unless a legal solution is proposed quickly, the Belfast City council will have succeeded in perpetuating one of the most egregious cases of discrimination that the dog world has known.
End update – ed.
[dcs_head top=”0″ color=”#000000″] [/dcs_head]

In addition to the death penalty, the Belfast City Council is requesting that the dog’s family be forced to pay for the cost of his eleven month confinement in conditions described as inhumane.

Full details of his seizure and subsequent tribulations are documented below. New details are expected tomorrow, but his family has already made it abundantly clear that this is not the end of the road for their loved one, and they are already looking into the appeals process as outraged supporters continue to offer encouragement.

On the 19th May 2010, Lennox, a five year old American Bull dog Labrador cross was wrongfully seized by Belfast City Council Dog Wardens from his loving family home where he lives with his owners and his kennel mates. Lennox committed no crime nor did any member of the public complain about him. Three Belfast City Council Dog Wardens came with the PSNI to his home unannounced. The Dog Wardens then told the Police to leave as there was no need for them at the location.  The Belfast City Council Dog Wardens then had tea with his owners, smoked cigarettes, chatted, played with the other family dogs after which the Dog Wardens then measured Lennox’s muzzle and rear legs with a dress maker’s tape measure and decided on those measurements without seeking any professional advice that he was possible “Pit Bull Type Breed” and so he was led from his home to be put to death by the Council. Northern Ireland has yet to fully implement the same dog legislation as mainland UK; if Northern Ireland were to complete the dog legislation here then Lennox could now be at home with his family and they would not now be facing legal prosecution. The USPCA said the law in Northern Ireland could be changed simply and rather quickly by an order in Council.

Lennox’s family have done more than required by the law as responsible dog owners who also foster dogs for various Northern Ireland dog shelters. When Lennox was a puppy his owners had him neutered, licensed, insured, DNA registered, Pet Safe registered and micro chipped and although the Belfast City Council have issued a dog licence for Lennox for the last five years and continue to do so today, the Council now find the need to class him as a Pit Bull type dog and murder him. On the day Lennox was ripped from his family home the Belfast City Council issued his owner with a warrant of seizure which was incorrectly addressed and was for another location, furthermore the Council used the ADBA Inc (American Dog Breeders Association Incorporated) breed standards guide to help identify Lennox as possible Pit Bull type. It has now become clear that the Council used this ADBA breed standards guide illegally breaking international and Berne copyright laws as Belfast City Council have never been authorised by the ADBA to use the copyrighted breed standards guide in full or derived version. Since Lennox’s seizure the ADBA have issued the Belfast City Council with ‘Cease & Desist’ orders due to the Council’s unauthorised continued use of ADBA material.

Lennox’s owners have only been contacted once by the Belfast City Council and this was two hours after Lennox had been taken. One of the Dog Wardens who seized Lennox telephoned Lennox’s owner to say “If you do not sign him over to us to be destroyed then you will most certainly lose your job as we will force a prosecution upon you through the courts.” On many attempts the family have telephoned the Council’s Dog Control Manager but to date the Manager has never taken the families call or returned any calls. Lennox’s family have never been told where he is being kept, what condition he is in, what type of care, feeding or regular exercise he receives, if any. Lennox’s family have repeatedly requested visitation to see what condition he is in however the Dog Control Manager for Belfast City Council Dog Wardens Department has continually refused all requests through the families Solicitor. Photographs of Lennox have emerged recently and have been passed to the family which clearly show Lennox in a cold inhumane concrete kennel which is visibly too small, there are no visible signs of a constant fresh water supply, heating, toys for stimulation and the photographs show Lennox sitting upright in a box type bed surrounded by his own faeces with only saw dust for bedding which many dog experts have agreed is harmful to dogs and unsuitable for bedding, yet Belfast City Council Dog Wardens Department have stated they practice humane animal welfare as set out by the DARD (Department of Agriculture and Rural Development). After studying the Animal Welfare Act 2006 it is clear that none of Lennox’s welfare needs are being met at this undisclosed Council contracted kennel. 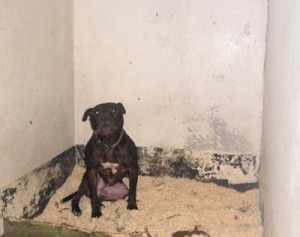 Local leading MP’s joined in support of Lennox stating in the Belfast Telegraph and other media they were “Appalled” by the seizure and treatment of Lennox and his family. A global campaign which boasts hundreds of thousands of supporters and petition signatures has begun in support of Lennox’s freedom. The ADBA Inc, various Animal Rights groups, Animal Welfare organisations, Veterinarians, Dog Breed and Behaviourist Experts have all gave their support for Lennox’s freedom and many supporters who are regular tourists to Northern Ireland have went further to state they will not return to Northern Ireland until Lennox is returned to his home. The most heartfelt plea of all was heard from Brooke, the owners eleven year old Daughter who is registered disabled. Lennox grew up around Brooke and the two became inseparable. Due to Brooke’s illness she is unable to play each day with other children and so found Lennox to always be there as a playmate and someone to be of comfort to her. Since her best friend was taken Brooke has missed much School due to suffering health and unneeded stress caused by missing her dog. Brooke’s specialist Doctor at Belfast Royal Hospital for Sick Children has also expressed growing concern for the child’s separation from her pet.

We ask for your help to Save Lennox, stop his incarceration and stop him from being put to death by Belfast City Council who wrongfully took him. If you have any compassion you will clearly see that far too many wrongs and errors have been made by the Council in the seizure of this much loved family pet and you will help correct a wrong. Please help this little girl become reunited with her best friend.

What You Can Do

1. This is a stumbling block, and cannot be accepted as defeat. For the sake of Lennox, please offer your support to his family and keep up with developments in his case by joining the Save Lennox Facebook fan page.

2. Let the Belfast City Council know what you think of their actions in this case. Contact them here:

You may also be able to leave feedback on the Belfast City Council Facebook page but it would appear that they are deleting many messages left there in order to keep things tidy.

3. Tell his story. Share it with those who understand, and educate those who do not.

Gain a greater understanding of the persecution of Lennox by watching this video.