Capt. Jack might have been born a bit screwy, but there’s no doubt that the circumstances of his very early life had a huge impact on his personality and behaviors.  He was abandoned on a country road on a cold winter night when he was only several weeks old.  He’s traumatized and has so many behavioral issues and quirks that most people would have given up on him, but his family will only love him harder.

His story comes from The Animal Rescue Site, which in addition to featuring fan-submitted rescue stories, offers a wide selection of clothing, décor, pet supplies and other gifts.  For each purchase made, a food donation is given to shelter pets in need.  Now is the perfect time to shop!

This story has been edited only for clarity. 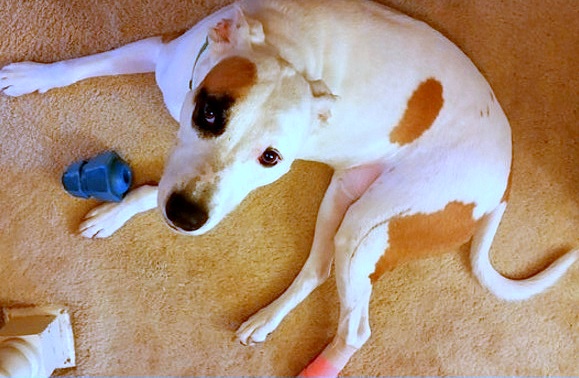 Meet Capt. Jack. As a puppy – beyond adorable. I knew he was our next dog. As most rescue stories start, it wasn’t a happy one. He was dumped on a cold country road at night in Dec., six-eight weeks old. The country vet, whose wife happened to be hubby’s high school classmate, took him in. She posted pictures, hoping to find his forever home. Hubby saw the pics and I cajoled that we could foster. He agreed to foster, but I knew we were his forever home and the “fostering” was a ruse. We went to meet Capt. With our other rescue pup, Chloe, whose start was just as rough.

Chloe and Capt. were BFFs instantly. Loading Capt. in the car, my husband realized this was forever, not foster. The vet’s wife, thrilled he was ours, she saw red flags with him and was she right! We had challenges galore. Capt. was very different from our five previous rescues. He was scared of men, the dark, strangers, and the vet. He has fear aggression. He’s curious about everything and afraid of it all. He lunges at people and tries to nip. He bullies around the house and terrorizes our two cats. Mortal enemies are critters, he chases and on occasion catches.

He’s expensive with double knee surgeries. He ripped his toenails so badly, needed a vet visit to stop the bleeding, snip and wrap foot. He’s on Prozac. He’s doped for vet appointments. He has incredibly stinky gas. He can’t handle temperature extremes.  He lays on air conditioning and in front of furnace wall vents. He survived the great “Christmas Tree Massacre of 2012.”  He pulled glass bulbs off the tree and chewed them, and littered the room with glass shards.

He hates delivery people.  His battle with the neighbor’s cat ended in defeat and left Capt. a bloody mess.  He’s cute but not cuddly, a terrible combo. People always want to pet him. He’s not the brightest bulb on the tree, but he sure is the cutest. Cute can get you far.

On top of all that and his many other quirks, we love him fiercely. Our vet has said time and again, Capt. Jack is lucky to have us. Most other people would have given up and likely euthanized him. Capt. Jack, long may he reign!

Submitted to The Animal Rescue Site by Robin RT of Columbus, Ohio