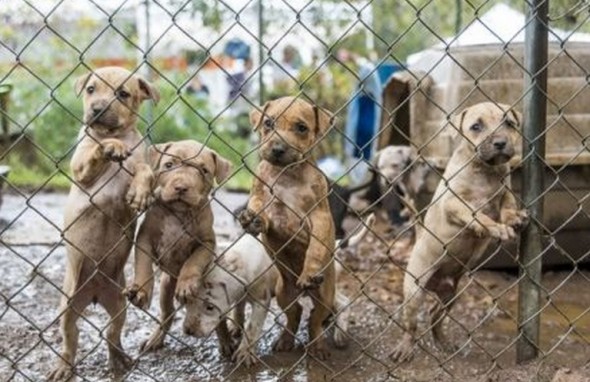 According to police reports, 23 dogs were removed from a property suspected of being a dog fighting operation.  The reports say that many of the dogs recovered would typically be breeds used for such a thing, and many of the recovered dogs had injuries consistent with fighting.

The investigation into the people responsible is still ongoing.  Police say they have talked to many neighbors and possible people of interest.  Although as of the immediate no one has been arrested, the police want to make sure they cover every suspect fully.

A woman calling herself the aunt of the property owners says the dogs were never used for fighting.  She is claiming that the dogs were being raised to be sold, not fight.  She also claims that one dog had an injury, and that dog was properly treated, but none were ever made to fight.

A treadmill was found surrounded by plywood on the property.  Something commonly used to train fighting dogs.  During the rescue, the local ASPCA took video evidence.  In that video can be seen 16 adult dogs and seven puppies tethered to very heavy chains, and the condition the dogs were forced to live in were disgusting.

Huntersville Police say they got wise to the fighting operation through tips.  Then, a special team was assembled with animal control and an investigation was launched.  This investigation is what lead to the removal operation.

The police department is now making sure they have enough information on the people in question to make arrests.  What will happen with the dogs is now up to a judge, and if any more information is released, we’ll cover it here.