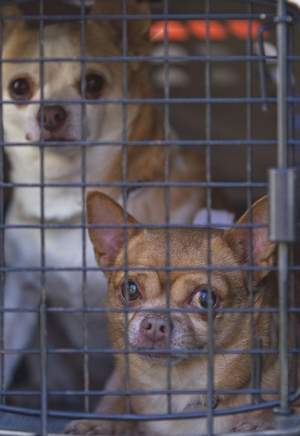 When 27 Chihuahuas needed transportation from Virginia to New Jersey, pilot Matthew J. Kiener stepped up to the plate. Kiener volunteers with Pilots N Paws. Keiner, along with his friend Byron Hamby, successfully flew all 27 Chihuahuas to New Jersey on Thursday where the Associated Humane Societies of New Jersey took them in to try to find them loving homes.

A man in North Carolina and his wife had been raising Chihuahuas for years, when the wife passed away a few years ago. The man recently learned after testing that he is highly allergic to the dogs, so all the Chihuahuas needed to be relocated. The woman’s sister tried to help out. She drove down to North Carolina to rescue several of the Chihuahuas that she had found homes for with family and friends. There were still 27 dogs left needing help. So the sister, who lives in New Jersey, contacted Chihuahua Rescue and Transport for help. Chihuahua Rescue and Transport reached out to Pilots N Paws to see if anyone would be willing to fly the pups to New Jersey.

Kiener has been volunteering for Pilots N Paws about twice a month, but this is the largest amount of dogs he has ever rescued in one trip. “I bought this plane to do this,” said Keiner, “I love dogs, and I love flying.” Keiner’s own dog, appropriately named Piper, was rescued from one of the first missions he flew for Pilots N Paws. Keiner thoroughly enjoys the missions. As he and his friend Hamby began their decent in New Jersey they started playing the song “Who Let the Dog’s Out?” in the cabin of the plane. Keiner would help out more if the cost wasn’t an issue. Keiner spends several hundred dollars a month on the rescue missions. The trip to save the Chihuahuas cost him $400.

The Chihuahuas are being housed at the Popcorn Park Zoo in Lacey, NJ. Keiner says the dogs are in relatively good health, though some are a little overweight. The zoo will prepare the dogs for adoption, and people interested in adopting one of them can come to the zoo to fill out an application.