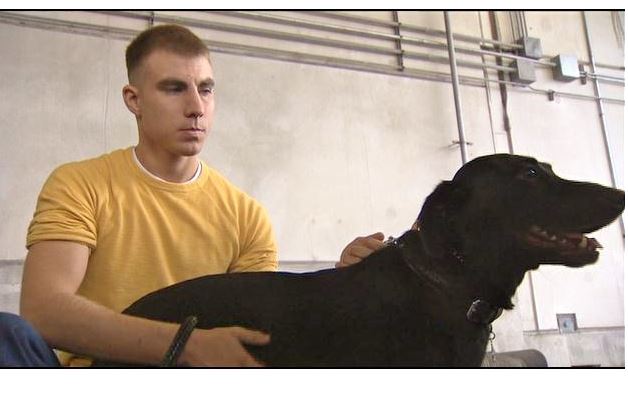 A U.S. Marine Corps veteran and the dog who worked by his side were reunited Wednesday months after serving together in Afghanistan.

The black lab, named Moxie, worked with Lance Cpl. Dylan Bogue searching for bombs in Afghanistan, but the pair were separated when they returned to the states following their tours of duty and Moxie got a new job working with the MBTA transit system police in Boston.

Moxie finished his tour of duty and returned home first, leaving Bogue not knowing where he’d been placed.

“We did a lot of security work leading up to the last Boston Marathon, we were all over that green line [subway system route],” Chip Leonard, the MBTA officer who kept Moxie as a family member and workmate, said.

Dylan Bogue missed his companion, the working dog who was a friend and a comfort during his military service in Afghanistan, and a Facebook campaign was organized to help him discover what had happened to Moxie after his time in Afghanistan.

After two weeks, Moxie had been tracked down and released from his duties with the MBTA. The two Afghanistan veterans were reunited in ceremony in Boston. Leonard will get a new dog on Friday.

“[I’m] very happy, very grateful for the people that made this come together. It’s really truly a dream,” Bogue said.

Bogue told WHDH Channel 7 Boston news: “The thing that makes him special is the times we shared together and the comfort that he was, being there besides us.”

When asked what Moxie means to him, Bogue responded with one word, saying “everything.”

Watch the story and see the reunited veteran and his dog:

15 thoughts on “Afghanistan veteran reunited with service dog in Boston”