For a New Jersey Chow mix dog who escaped his 2nd-story apartment, his freedom went as far as the length of the apartment building’s 2nd-story ledge. The pet was spotted stranded on the ledge by neighbors, and they called local firefighters to come rescue the dog. 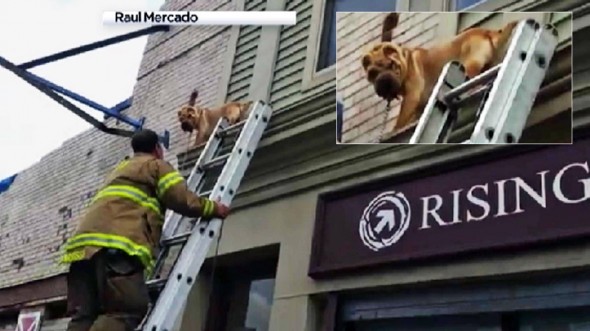 On July 31, 2014, the mischievous dog was home alone when he decided to break through a window screen and be free, but little did the dog know he would get stranded on a ledge with nowhere to go.

When neighbors and pedestrians saw the dog, they realized the pet was in need of help. They called authorities and kept an eye on the pet while Jersey City firefighters arrived on the since.

Even though the Chow mix was brave enough to break through the screen and walk on the ledge, he was too scared and unable to turn around, hop back through the same window he escaped, and get back home.

Firefighters used two ladders to reach the dog and safely bring him down to street level.

The canine was taken to Jersey City’s animal control, where he waited for his owner to claim him.