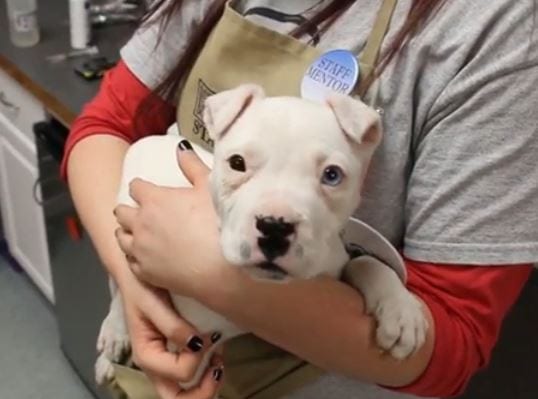 The high in Detroit for the day was 13 degrees. Sherlock Holmes was found curled up underneath a porch. That is where the one month-old American Bulldog puppy tried to brave freezing temperatures.

Thankfully, someone found him, brought him inside and immediately called the Michigan Humane Society Rescue hotline.

When the rescue driver arrived, the pup was still cold to the touch and his health seemed to be in jeopardy.

At the shelter, Sherlock Holmes was vaccinated and examined by an MHS veterinarian who confirmed that he had an upper respiratory infection.

Sherlock Holmes had a short stay in a  foster home during his recovery and it was not long before he was made available for adoption.

One month later, Sherlock Holmes went home to Lansing, Michigan with his new family, who knew his story from Facebook and an earlier report on his rescue.  The Badawi-Brown family plan to give their new puppy the loving and pampered good life that he deserves.