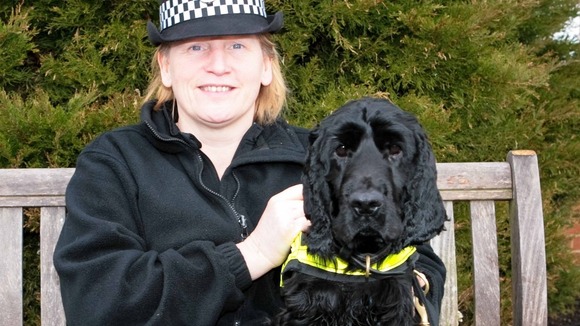 In 2008 a cocker spaniel named Griffin was rescued on the day he was scheduled to be euthanized. He went on to become an accomplished police dog and now after years of service he is retiring.

The Blue Cross in Ireland rescued Griffin just in the nick of time. He was scheduled to be euthanized that day, but luckily for the Wiltshire Police he was saved. Griffin began training and in 2009 he was partnered with PC Marie Poole.

During his years of service Griffin has been one of the most successful drug detection dogs the Wiltshire Police has ever had. He had over 500 drug finds during his career.  Highlights include finding over £3,000 worth of drugs on one woman and finding a man who had 450 LSD tablets hidden on him.

Even though he was a successful at his job Griffin always had a soft side that often endeared him to even the people he helped arrest.

“Being as cute as he is, he has also on a number of occasions given cuddles to people that he has caught,” said PC Poole. “Surprisingly, people he has caught have also given him a tickle and told him he’s a clever dog while they are being arrested.”

After five years of dedicated service Griffin is retiring and will live with PC Poole and her other retired police dog, Frank.