.
Maria Smith has her beloved pug Simba back from dognappers who demanded ransom and threatened to slice him apart if she did not stop posting at Facebook about him. Her use of Facebook was key in identifying the thieves and getting them to return Simba to her.

Maria let Simba and her other dog Junior out in her back garden in Walton, Liverpool, UK on the evening of July 22, but when she heard the scratching at the door that let her know the pair were ready to come in, only Junior was there. Thieves had apparently gone over the fence and taken Simba.

Maria posted online as part of her effort to find her dog and after several days was contacted on Facebook by people who said they had been offered her dog for purchase.

“We heard the thieves were walking the streets of Walton asking people if they wanted to buy a dog,” Maria told the Liverpool Echo.

“People got in touch with me to say they had been offered my dog. It’s wrong that someone can take your pet and try to make a profit from it.”

Through networking, the thieves were identified and named at Facebook, and the situation took a turn for the worse before being safely resolved.

“I got a phone call from one of the thieves ­saying, ‘If you carry on posting on Facebook I will slice your dog apart.’

“I offered them money,” Maria said. “In the end they just gave me the dog back because they wanted their names off Facebook. They were worried about being identified on the internet.”

Two women returned Simba to Maria nine days after he had been taken.

The relieved petmom said: “I have had no sleep. It has been horrible. It is heartbreaking to have a pet go missing. What is it ­coming to when you can’t leave your dog in your own back garden?

“I was lucky to get my dog back. There are people who never see their dogs again after they are stolen. I was worrying about whether they were feeding him properly or abusing him.

“I’m overjoyed he is back. People lose their dogs every day so criminals can make a profit and something needs to be done about it.’”

Merseyside police say they are investigating the case. 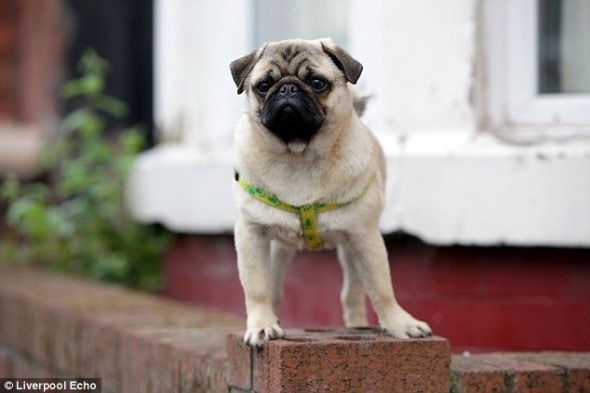