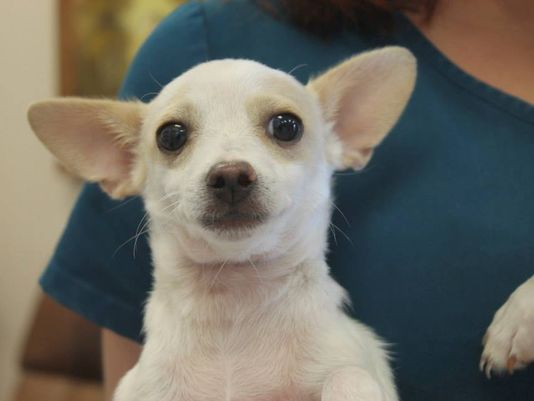 According to Police reports, during an adoption event held by All-Aboard Animal Rescue in Fort Collins, Colorado, a Chihuahua named Siberia was stolen.  The incident occurred sometime between the hours of 8:30 and 10:30am, and Siberia is described as male, having a tan and white coat, and being five months old.

The event was this past Saturday at a local Pet Club store.  Initial reports say that the dog thief is a teenager that tried to adopt Siberia, but was unable to because she was only 16-years-old.  She even attempted to have someone of age fill out the paperwork for her, but was refused.  The rescue has a strict policy of requiring a parent or guardian apply for the adoption.

Eventually, the girl said she would take the paperwork to her mother to have her fill it out, then left with the dog.  Executive director for the shelter Ashley Dinger said that the rescue has no idea of the name of the girl that too Siberia.  It wasn’t until after the event had ended, and the headcount came up one dog short.  Because All-Aboard has no physical shelter, and relies solely on volunteer foster families for housing, no one noticed Siberia was gone.

Dinger said that in the five years since the rescue operation started, this is the first time this has happened.  They have held many “Adoptapalooza” events in that time, and this is a true first.

“We have guidelines to ensure things like this don’t happen, but she removed paperwork that she wasn’t supposed to take with her,” said Dinger.  “It is possible that this was an overall mistake on her end, but due to the situation surrounding it, it appears it was malicious.”

Police are still looking for the girl and are asking for help.  She’s described as being around 5’4” tall, having a medium build and having light brown/dirty blond hair.  Anyone with information should contact Fort Collins Police Services at 970-221-6868 or All-Aboard Animal Rescue at 970-286-9902.