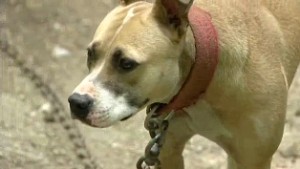 POLK COUNTY, GA — Police in Polk County arrested four people and rescued 33 dogs that were being trained to fight. They say dog fighting may have been going on at the home in the town of Aragon for years.

A raid at the home on Cashtown Loop Road capped a four month investigation by Norred and Associates, a private firm that helps law enforcement agencies uncover dog fighting operations.

This one was the whole deal according to Norred. They say the dogs were bred, trained and fought on the property. “This was a full blown operation with a fighting pit, treadmills and spring poles,” said Norred investigator Chuck Simmons.

Simmons described a fighting pit on the property as a “Cajun Rules” pit. “If it were in operation right now they’d have a carpet down, there would be scratch lines on the side, and the dogs would fight inside this pit,” he said standing in the middle of the pit.

The dogs were tethered to crude homes made out of 55-gallon barrels by heavy weight chains. Some of the dogs had water bowls but many didn’t have water in them. Captain Randy Turner of the Polk County Police Department said many of the dogs had no food or water. “We are giving them food and water and separating them, putting them in the shade, letting them cool off,” he said.

Polk County Police, Polk County Sheriff deputies, Polk County Animal Control and Cedartown Police helped Norred secure the dogs for vets to examine them. “We have some dogs that are heavily scarred around the face area, around the chest, around the neck which are generally injuries sustained during dog fights,” said Miguel Abi-Hassan of the Atlanta Humane Society.

Two men and two women who live in the home on the property were taken into custody by police. As of Wednesday night they had not been officially charged. Polk County Police said they will face charges of operating a dog fighting operation, cruelty to animals, and possession of marijuana and cocaine.