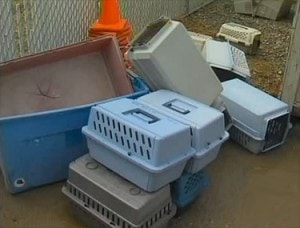 All that remains of 37 dogs rescued by Ruth Wilders is a scattered pile of empty crates left behind after Brown County dog warden Andrew Dunn seized and killed them in the shelter’s gas chamber.

Wilders has been picking up strays and bringing them to her 5.5 acre property outside of Ripley, Ohio for years, and according to county officials she has been visited by the dog warden in the past for concerns about the condition of her dogs. But according to the Ohio SPCA, Andrew Dunn illegally seized 37 dogs from Wilder’s property and had them immediately killed in a crude gas chamber at the shelter a couple of weeks ago.

“They told me they were going to kill them all,” Wilder told local reporters. “I’m angry but I’m afraid to say anything,” she said. The SPCA says the shelter’s gas box is inhumane, and has sent a letter to Dunn and Brown County commissioners demanding that they stop using it immediately.

Dunn was not available for interview, but has stated that the dogs were underweight, and that he believed that some of them had mange, a contagious condition that if treated, would not normally require a dog to be euthanized.

The Ohio SPCA demanded that the shelter provide all records for inspection. They say Wilder’s dogs were taken without a warrant, and marked as strays – which would have allowed Wilder 72 hours for the pets to be reclaimed. The SPCA says they are considering taking legal action against the county over the incident, and members of the local animal rescue community are outraged over what they consider the callous murder of 37 innocents.