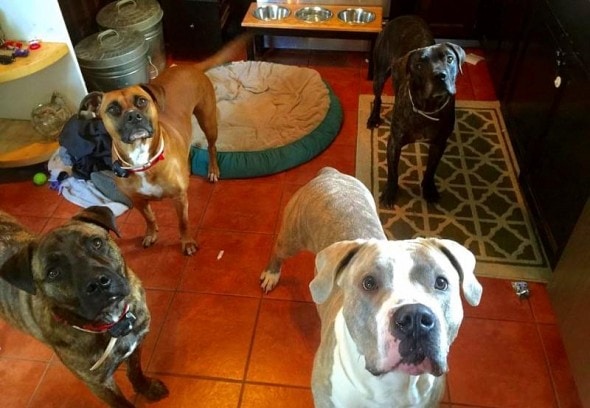 Emily Wagner of Long Valley, New Jersey was sitting in the backyard of her home one morning with her three-year-old daughter.  A bear that the family is not unfamiliar with climbed the fence, and made its way toward the little girl.  The family dogs saw the bear, and stepped in to save the little girl’s life.

Regardless of the fence that was put up in the Wagner’s backyard, this bear has made it’s way over and into the backyards of many people in the neighborhood.  This wasn’t the first time the Wagners had been visited by the bear.  They say it happens at least once a week.

“Usually the dogs will chase him off and he’ll climb over the fence and wait (for the dogs) to come inside,” said Wagner.  “He’s very smart.”

However when the bear came over the fence this past Wednesday, the bear seemed to have a different plan than usual in mind.  Wagner’s daughter was out in the back with one of the family’s four dogs.  The rescue dog, named Chief, didn’t even notice the bear until the little girl screamed.

Wagner said, “I looked up and the bear was about 15 feet from her and walking right toward her.  The bear was between us.  Chief heard her scream and immediately grabbed the bear’s back leg, at which point the bear turned and bit Chief’s face and leg.”

At that point, the other three dogs, all rescued pit bulls, took notice, and ran in to assist.  The four dogs managed to scare the bear away, forcing it back over the fence and into the woods.  By the time the police showed up, the bear was long gone.

In an effort to stop the bear from continuing to get into the backyard, the Wagners have talked to the town mayor, Bill Roehrich, the New Jersey Division of Fish and Wildlife and many other officials.  They all seem to say the same thing, which is of zero help to the Wagners and the issue at hand.

“We’re not allowed to kill the bear, not that we want to, and if he injures a dog they give the bear the benefit of the doubt and say it’s in self-defense,” Wagner said.  “They won’t trap and relocate the bear, but will shoot it with rubber bullets and then release it back into the area.”

The only way that the bear would be trapped and possibly euthanized, is if the bear attempts to get into their home, or goes charging after one of the human family members.  New Jersey laws don’t cover possible attacks on people’s pets at all for some reason.

Police in the area say that you should never try to take the bear on for any reason, or discharge a firearm at it.  They want you to call 9-1-1 to have them deal with it, but from the look of things, they don’t seem to be able to help the Wagners or the other families in the area that also face clear and present danger, from having a bear enter their yards.  This obviously puts both humans and pets in danger.