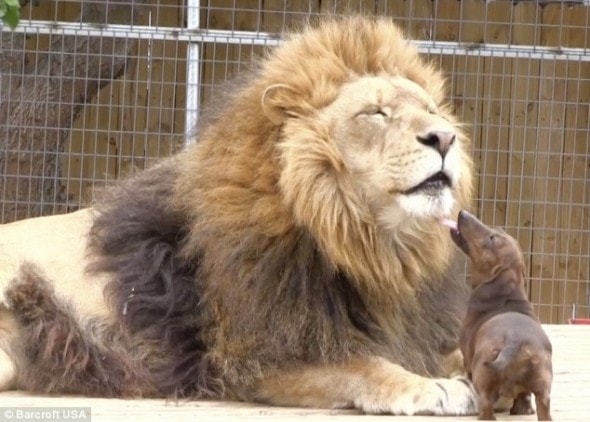 It’s an unlikely friendship, but one of the best you’ll see: that of a lion and his dog.

The 500-pound lion, named Bonedigger, was born with a rare metabolic bone disease, leaving him partially disabled. He met the then two-year-old Dachshund Milo as a cub in the Garold Wayne Exotic Animal Park in Wynnewood, Oklahoma, and they have been best friends since that day five years ago.

Two other dachsies, Angel and Bullet, also serve as protectors to this king of the jungle. Likely sensing that the lion was disabled and not as much of a threat, the caring dogs put him under their wings, err, paws. 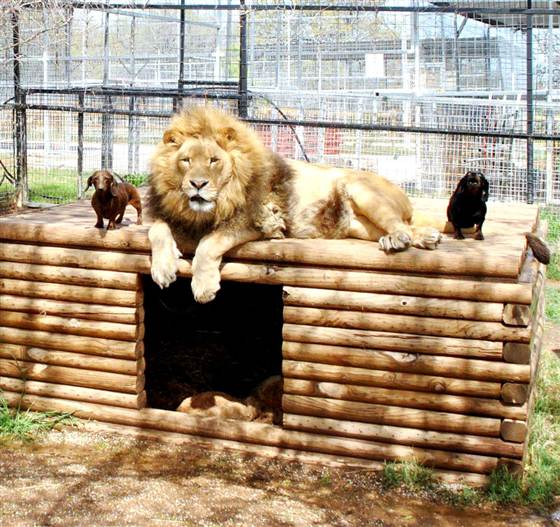 Park manager and animal handler John Reinke has seen this strange friendship develop over the years, and has witnessed a very loving relationship.

“This friendship between an 11-pound wiener dog and a 500-pound lion is the only of its kind in the world ever seen,” John said. “But Bonedigger would only ever be this friendly with these dachshunds. He wouldn’t be so friendly with other dogs – it’s all down to them being pals since he was a cub.” 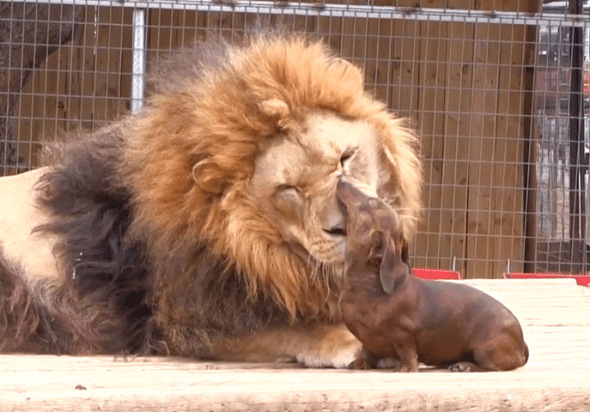 The peculiar pride enjoys doing everything together, but especially feasting on chunks of raw meat. Milo even tries to imitate his colossal cohort’s “puffing” – the chuffling, snuffling noise that lions use to communicate with one another (akin to a housecat’s purring). They play on and roam the grounds, and when it’s time to sleep, cuddle together. The pair is so close that Bonedigger and Milo smooch, and the little dog even and cleans his teeth!

The grounds of the zoo were flooded and damaged by the recent tornado, but are still managing to provide shelter for its own animals, as well as others (both wild and domestic) who have been displaced and are homeless because of the weather.