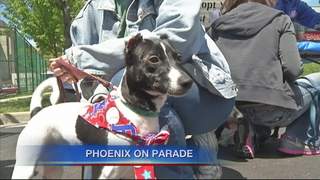 Fans of Phoenix, the burned Jack Russell terrier, came out in droves on Saturday to see him lead the Dog Day Parade at Coca Cola Field in Buffalo on Saturday.

Dog owner Anna Hensey said, “We work all day, and we really don’t spend enough time with our dogs. And this is a really good chance to spend a lot of time with them.”

Before the first pitch was thrown, a 300-dog parade was led by Western New York’s favorite dog, Phoenix. Event organizers felt that given the suffering he endured, there was no better choice to head things up than little Phoenix, who adores the attention.

After being set aflame and nearly dying last year, Phoenix has made a miraculous recovery, and is now the poster dog for the City of Buffalo Animal Shelter.

In addition to dog-loving fans, the Bisons invited the SPCA to bring some available adoptees.

“It’s all dog lovers who are coming to the game today with their own dogs,” said Kerry Neaf of the Friends of Buffalo Animal Shelter. “So, we brought five adoptable dogs with us, hoping somebody falls in love.”