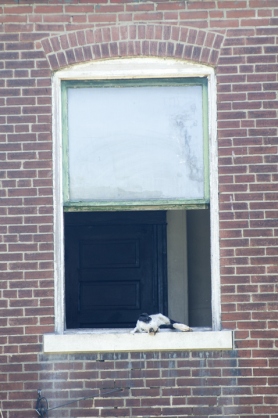 With rampant, unchecked animal abuse occurring on a daily basis, Saint Louis City has a dark cloud hanging over it that largely remains a secret to the rest of the nation. In a state notorious for puppy mills and lax animal abuse laws, St. Louis continues to stand out among other major metropolitan cities for their unwillingness to dedicate any resources of consequence to combat the rising animal abuse epidemic that plagues the area.

Stray Rescue of St. Louis, a companion animal rescue and shelter nonprofit that has been featured on networks like CNN, National Geographic and Animal Planet, arrived at a vacant city house littered with gang graffiti on Tuesday, May 15 to find five dogs savagely tortured and killed.

“I have seen a lot of horrific abuse in the decades I have been rescuing dogs, but I haven’t seen anything this barbaric,” said Randy Grim, Founder of Stray Rescue. “It was like a scene from the most shocking horror film, and it will stay with me forever. These dogs truly went through hell.”

In the house, rescuers found chains and electrical cords used to restrain and strangle dogs. They found skeletal remains of a dog that had been choked to death, and a trail of dried blood that led to an area where a dog was burned – more than likely alive. Furniture was stacked upon more furniture over the body of another dog that had also been strangled with a cable cord.The lifeless body of a dog seen through an upstairs window was draped over the windowsill.

X-rays, taken by Stray Rescue’s veterinary staff as part of a necropsy report, revealed severe trauma to the larynx. The vet staff believes that this was caused by the abusers positioning the dog on the windowsill and slamming the window down upon him repeatedly, crushing his larynx and killing him.

One witness in the area, who wishes to remain anonymous because they are afraid of the gang who committed the abuse, reported a sixth dog who was lynched, having been hung out of a window. This dog has not been recovered.

“It’s terrifying to know that people who are capable of such abuse are running free in our neighborhoods right this moment, and it’s chilling to not know who their next victim will be,” said Grim. “Stray Rescue is offering a $5,000 reward to anyone who comes forward with information that leads to the conviction of these abusers.”

Stray Rescue is offering a $10,000 reward for information leading to an arrest in the case of five dead dogs discovered in a vacant home on Wells avenue. Grim said the inside of the home was a literal torture chamber. The dogs were discovered when police responded to a call about a dead dog hanging out a window the home.

“The reward (which started at $5,000 on Wed.) has already encouraged people to call with information, and we hope this increase in reward money will motivate citizens to step forward with critical details about the case,” said Grim. “We’re working tirelessly to catch these abusers and get them off our city’s streets.”