Each year, PetSmart Charities gives thousands of dogs and puppies — who otherwise would be euthanized at shelters that have run out of space and resources — the rides of their lives. Today, the Rescue Waggin’ program, which transports adoptable dogs from overcrowded shelters to communities where they are in demand, gives the 50,000th dog another chance at a forever home. 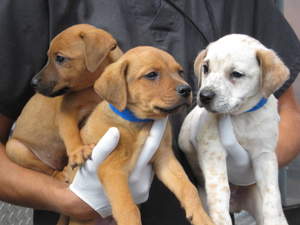 PetSmart Charities’ Rescue Waggin’ program unites animal shelters from across the nation in an effort to avoid euthanizing healthy, adoptable dogs and find homes for more pets. The Rescue Waggin’ program is the first and largest national pet transport program in the U.S. and has been labeled the “gold standard” for pet transport by veterinarians and national humane organizations.

“Since working with our first shelter in 2004, this has been the culmination of seven years of expansion and collaboration among shelters across the country,” said Susana Della Maddalena, vice president and executive director of PetSmart Charities. “The success of the Rescue Waggin’ program is evident in the participating shelters’ increased adoption numbers and significant reductions in euthanasia rates. In one case, euthanasia dropped by as much as 50 percent. We are thankful for the cooperation among our shelter partners and look forward to saving even more lives.”

“Partnering with PetSmart Charities and their Rescue Waggin’ program has been one of the most important life-saving opportunities our shelter has ever implemented,” said Mary Martin, executive director of the Santa Fe Animal Shelter & Humane Society. “We’re thrilled the 50,000th dog is coming from our shelter. Every month, dozens of loving puppies and dogs from Northern New Mexico have found homes in Colorado, thanks to this hugely successful collaborative effort. The program has truly changed the nature of rescuing, and we are thankful to be part of this wonderful mission.”

The Rescue Waggin’ program has expanded from one site in the Midwest in 2004 to 60 shelters in 22 states today, making it the largest pet transport program in the U.S. The program runs four routes: one on the East Coast, one in the Midwest, one in the Great Plains, and one in the South Central states region. Specially equipped vehicles have logged more than 1.5 million miles and can comfortably transport as many as 50 to 60 puppies and dogs at a time, providing them with a temperature-controlled environment, complete with piped-in lullaby music.

“We are so excited and proud to be the recipient of the 50,000th dog transferred through PetSmart Charities’ Rescue Waggin’ program,” said Lisa Pedersen, CEO of the Humane Society of Boulder Valley. “Since joining this program in 2007 as the Great Plains region destination shelter, we’ve re-homed 8,294 dogs with loving families. This milestone is a celebration of the thousands of lives saved through this partnership and is a tribute to the power of collaboration.”

PetSmart Charities’ Rescue Waggin’ program has not only helped save the lives of thousands of pets, it also has helped many shelters improve their operations program and manage their pet populations in a more sustainable way. “Rescue Waggin’ is a three-pronged program; transporting dogs to new homes and providing capacity building and spay/neuter grants in the source shelters to help reduce the number of unwanted dogs and help them improve their operations locally,” said Della Maddalena. To learn more about the Rescue Waggin’ program, visit http://www.petsmartcharities.org/rescue-waggin/ .

The PetSmart Charities’ Rescue Waggin’ program is funded by donations. Members of the public can support the program by making a tax-deductible donation online, by email at [email protected] or via phone at 623-587-2826 to help more dogs take the life-saving rides of their lives.