After two harrowing months spent in a filthy, abandoned apartment in New Bedford, Massachusetts, a starved dog became so desperate that it injured itself by jumping out of a third story window. 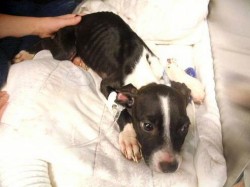 The frightened, emaciated dog made the leap in an apparent search for food, animal control officials said. They also noted that the one-year-old female terrier mix suffered a broken hip and hind leg in the resulting fall. New Bedford Animal Control Officer Emmanuel Maciel said that the dog underwent surgery yesterday at a local veterinary hospital and is expected to make a full recovery.

A second dog was found in the same apartment. Maciel said the four-month-old pup is also recovering from starvation, but is expected to bounce back from what can only be described as a horrific case of cruelty. He reminds pet owners to reach out for help when no longer able to care for their animals. “That’s what we do. We know that times are tough and sometimes you may not be able to have food or water for your animal – but call us do the right thing don’t just abandon them,” he said.

The Animal Rescue League of Boston is asking for the public’s help with the dogs’ care and rehabilitation. To donate, call 617-426-9170, Extension 615, or visit www.arlboston.org/donate

Anyone with information regarding the incident is urged to call New Bedford Animal Control Officer Emmanuel Maciel at 508-991-6366.

Forever Paws Animal Shelter will care for the dog until a new home is found. Keep your eye out for an adoption listing in the near future.

9 thoughts on “Starved Dog Jumps Out of Third Story Window”