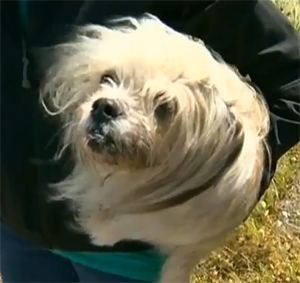 An elderly Canadian woman says her protective instincts took over when two cougars attacked her eight year old terrier. Jackie Simonson, 75, was out walking her two dogs when the big cats quickly approached them and grabbed the dog by the throat.

“The two cougars ran out of the building there and starting chasing my dog and one got a hold of her by her throat.” says Simonson. She says there was no help in sight, so she was left to defend her beloved pet on her own. Using all of her strength, she began to kick the cougars in an attempt to free Teddi. “I couldn’t do anything but kick it.”

Painfully aware of her odds, Simonson said she knew it was unlikely that she would win a fight against the cougars, but she couldn’t bear the thought of standing by and watching them kill her dog.

“There’s nothing else to do, there’s nobody around,” says Simonson.

She kept kicking the cougars while pursuing them as they attempted to carry Teddi away. “I kicked and I kicked and they wouldn’t let go. It was horrible,” says Simonson tearfully. “All I could see was her dead.”

Surprisingly, when she thought all hope was lost, Simonson managed to save her dog with two well-placed head kicks to both cats: stunned by the blows, the cougars dropped Teddi and ran off. She said aside from a broken jaw and a few puncture wounds Teddi is in fairly good shape. She is scheduled for surgery tomorrow and is expected to make a full recovery.

Simonson says risking her personal safety to save her pet was never a consideration – she was just doing her best to protect a beloved family member.

“I couldn’t have grabbed her, that wouldn’t have worked. That would have killed her,” says Simonson. “I had to kick the animal.”