Just two weeks after a similar raid that saved 300 dogs bound for Vietnamese restaurants, Thai authorities say they have intercepted another shipment of dogs before it could cross the Mekong river into Laos.

And in this case, they say the stakes were much higher. Officials found nearly 800 dogs packed into rusty cages when a river Navy patrol unit headed by by Captain Thirakiart Thong-aram intercepted the shipment in the Ban Paeng district of Nakhon Panom province. The traumatized canines were being held in a truck parked on the banks of the Mekong as it prepared to transfer its cargo to boats waiting to shuttle the dogs out of Thailand. 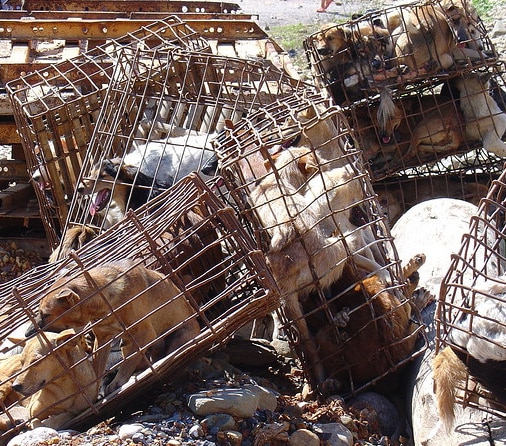 The Mekong flows through China, Myanmar, Laos, Thailand, Cambodia and Vietnam, making for convenient transport of smuggled goods, and Thai authorities have stepped up river patrols to counter the booming dog and drug smuggling trades.

A 37-year-old villager was arrested, but the remainder of the smugglers evaded capture. Navy officers found approximately 100 empty cages at the scene – a sad indicator that as many as 2,000 dogs may have already been sent to their deaths.

The dogs were being shipped to Vietnamese restaurants, where demand and prices have escalated due to recent efforts to curtail the illegal dog meat trade. In fact, in recent months, the cost of dog meat has doubled, from 500 baht ($16) each to 1,000 baht.

A brief report on the raid from the AP.