One of the nicest dogs Lori Brooks has ever met is a pit bull named Duke. The fact that Lori and her partner, Vicki, have met thousands of dogs in the last two years alone isn’t the only thing that makes that remarkable. What’s even more surprising is that just a few months ago, one of the most gentle and affectionate dogs to ever come through Lori’s rescue was being used as bait in a dog fighting ring.

Lori’s rescue organization, Hands Paws Hearts, is located in the high Mojave Desert, about an hour north of Los Angeles, in a house Lori and Vicki bought in 2010 for the specific purpose of rescuing dogs, which they do, in huge numbers. Last year alone, Hands Paws Hearts rescued over 1,100 dogs from the local shelter.

Among the dogs Lori and Vicki have saved, Duke is one that they will probably never forget. Over a year ago, he was reported stolen from his home in Downey, a city in Southeast Los Angeles County. When he was found, he was so savaged that you could barely make out his face. It wasn’t hard to guess why.

Bait dogs are ordinary dogs used to cultivate blood lust in dogs being trained for illegal fight rings. They’re chained to posts, sometimes with their legs tied and their mouths taped shut to render them helpless before the fight dogs are cut loose on them. Some are killed instantly by their attackers; others are tortured repeatedly before being tossed aside and left for dead by their owners. Some are shot or hung when they’re no longer useful. Once in a while, a dog like Duke survives.

The police contacted Duke’s former owners, but after promising to come pick him up, they were never heard from again. So Lori and Vicki took Duke in and oversaw his recuperation.

In the time he’s lived at their home, alongside dozens of other dogs and puppies, they’ve never heard Duke growl, bark, or show any signs of aggression. When you approach him, he saunters right up to you and leans his volleyball-sized head into your leg for a scratch. He carries his stuffed animals around with him wherever he goes, like a toddler with a teddy bear. 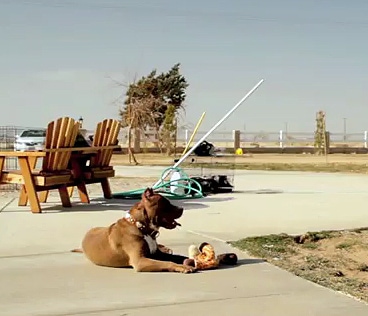 This is the characteristic pit bull personality that once made them the most popular family dog in America. Today, pit bulls face discrimination in every neighborhood they’re found in, whether through breed-specific laws, people’s fear of adopting them from rescue shelters, or pedestrians steering a wide berth whenever a pit comes trotting down the sidewalk. With all the hype and hysteria, it’s easy to forget that pit bulls were once known as the “nanny dog” because they could be entrusted to look after the children.

Now, because of dog fighting criminals like those that nearly killed Duke, as well as reckless owners who raise them as “guard dogs” and keep them tied to a stake in the yard without training or socialization, pit bulls have become the most hated breed in the country – which makes them double victims: first of violence, abuse and neglect, and then of human contempt and prejudice.

Duke’s story is a tragic example of that victimhood. Lori’s and Vicki’s commitment to him is an example of how we can begin to end it.

To watch other episodes and to stay posted on future videos, please “like” Dog Park Media on Facebook and visit us at DogParkMedia.com.