A dog that was rescued 6 years ago and given a chance at a wonderful new life has returned the favour in the best way possible.  On Sunday night Duke, a normally obedient dog, jumped on the bed of Jenna Brousseau.  He was shaking and jumping around, which woke up Brousseau and her husband who were at first confused by his strange behaviour.

But confusion quickly turned to alarm when they realized he was quivering uncontrollably.  “He is insanely obedient, so this is extremely bizarre,” Brousseau said.  They immediately went to check on their 9 week old daughter, Harper, and found that she was not breathing.  “My husband called 911 and the ambulance came here and it was because of our Dukey dog, who alerted us,” said Brousseau. 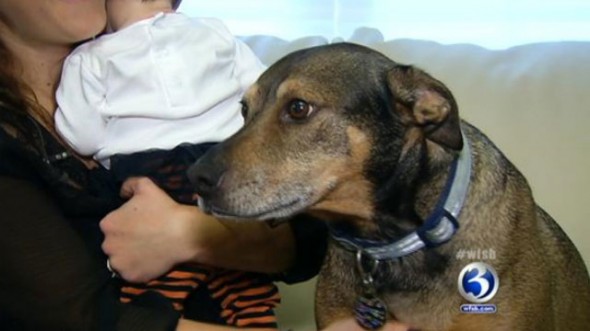 Harper was taken to hospital after being revived by paramedics and is now doing well back at home.  This is every parents worst nightmare, and because of Duke’s incredible instincts and persistence, Harper is alive and well today.  It is also a testament to the Brousseau’s for paying attention to Duke’s behaviour, which was extremely out of character for him.

Jenna Brousseau believes that Duke understands what they did for him when they rescued him and truly wanted to return the favour.  They also want to share their story to encourage others to rescue a dog and give it a second chance at a happy life.