One brother saving another brothers life is a beautiful thing, and that is exactly was Baxter did for his brother Bailey in Cape Cod this week.  The golden retrievers were tethered on the same lead in their yard when they managed to escape over 2 weeks ago.   Their desperate owner Penny Blackwell searched relentlessly, putting up posters and even asking for help on Facebook, but to no avail.

After 2 weeks had gone by she had begun to give up hope.  Then while she was out of town on business she got the best text message ever, from a friend who had found Baxter wandering near home.  Blackwell was ecstatic and as soon as she was back with Baxter, he led her on a chase to find his brother.  “Baxter kind of led me off the side through the woods. I had twigs in my eyes and leaves in my hair,” Blackwell said. 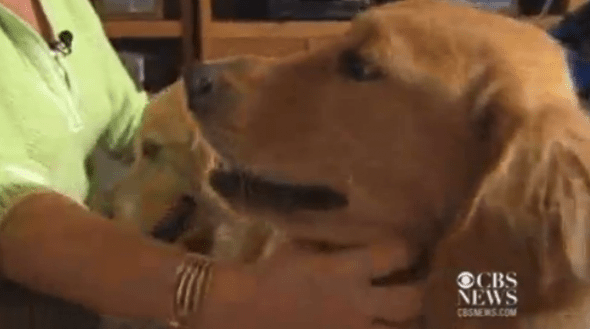 It turned out that Bailey, who still had a lead on him, was tangled up around some bushes and was stuck.  Blackwell presumes that they were both trapped in the same spot until Baxter managed to break free and find his way back, eventually leading to the rescue of Bailey. “I could hardly get him untied because he was jumping on me and jumping on Baxter because he was so happy to see us,” Blackwell said.

Both dogs had lost quite a bit of weight but were otherwise in good health and extremely happy to be home.  A very grateful and happy Blackwell says Baxter is a hero for leading her to his brother, a wonderful rescue to give this near tragic story a very happy ending.