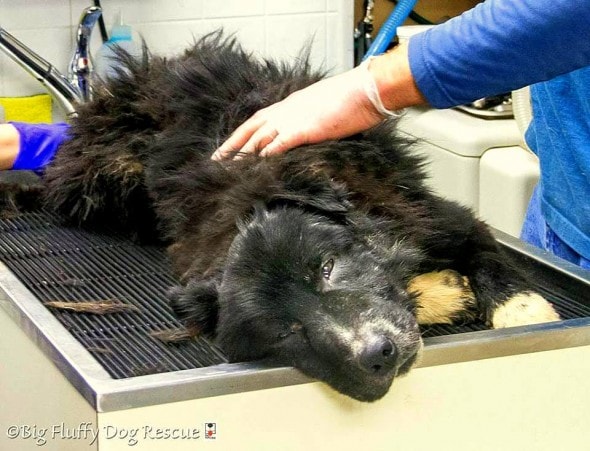 This comes from Big Fluffy Dog Rescue in Tennessee:

Well fans, I promised I would post about yesterday and so here it is. Whatever scrap of faith in humanity I had left died yesterday and I am so heartsick over what we saw that I am not sure I can write it down for posterity. I will do my best.

23 dogs came out of a shelter yesterday and are in our care. This shelter is a no-kill shelter run by a local government. This particular county is a very small, very poor county. We had taken several of the dogs out the previous week and given the condition of the dogs, we had to make arrangements to get the rest. There was no chance we would leave behind the others. For one week, I said a nightly prayer for the dogs in that place while we made plans for where they would go, as rescuing miserably ill dogs on a holiday weekend is more expensive and difficult than usual. Sadly, the seven 10-day-old puppies we took out last week with their mom all died over the past week from disease caused by the conditions in the building.

We left behind 23 dogs in a shelter built for 10 last week and it nearly killed me to do it. Watching the faces of dogs all desperate to leave and seeing them lose hope as I walked past was a stab to the heart. The building had one light bulb at the front by the door and the dogs were housed in perpetual darkness in a block building on the edge of a landfill. Each run had a hole in the back for waste to be washed down, but unfortunately, it appears the septic system has failed and the liquid waste just sits in the hole at the surface and spills over onto the 3 x 4 foot area that housed two to three dogs. For many of these dogs, this was home for months to years. The suffering these dogs endured defies description.

Most of the dogs have sarcoptic mange and almost all are suffering from injuries created by dogs fighting for resources. We have bite wounds, ripped and bloody ears, abscesses, and lacerations all over most of the dogs. The particular dog shown here, Chewbacca the Border Collie, had his scalp ripped off by another dog and he will have to have plastic surgery to repair the damage. We have two post-partum moms with milk but no puppies which means those puppies died there. We also have several with orthopedic injuries consistent with blunt trauma. They all appear to have lost hope, but from experience with other similar cases, I know that in a few weeks, they will all look happy and bouncy and by spring, anyone looking at them would never know the horrors they have seen. Until we came in, for most of these dogs, the only ticket out of that place was death from injury from fighting with other dogs for resources or disease. I will never ever be OK with that and if this is what “no-kill” means as a shelter, then it’s worse than euthanasia. I work hard to make sure dogs do not die in shelters, but to see dogs who have suffered in the dark is a dagger to the heart.

My heart is broken today and I have 19 dogs hospitalized for the week to try to patch them up to eventually send them home. As usual, we are cleaning up after someone else’s mess and I am tired of being the savior of dogs that never should have been in this kind of danger anyway. The fault lies with the people who were irresponsible enough to not care for their dogs in the first place and it also lies with the shelter for not seeing that their actions were actually harming the dogs. The shelter – if you can call it that – needs to be bulldozed, as it is simply not acceptable by third world standards, let alone here in the US. We will be working to ensure that a new shelter is built and we want to never have to come there again to do this. I will post updates on how this goes. As I have time, I will post individual pictures to the virtualfluffies.com site so you can see what we have here. (This is not the first cruelty case – see more here.)

In the meantime, we are going to be desperately poor and we need some help. If this is the start to my Thanksgiving, I guess I will be grateful that the dogs are safe and will recover, but I am not happy that once again our regular mission is being killed off by expenses incurred because of someone else’s negligence. We are not an animal control, we are a rescue, but we cannot in good conscience take out the Great Pyrenees and leave behind the dogs to suffer in perpetuity. If you would like to donate to help these dogs, you can do so HERE and HERE.

Thank you as always. I am grateful for your help and also for those that have been on the front lines of getting these dogs out to safety.