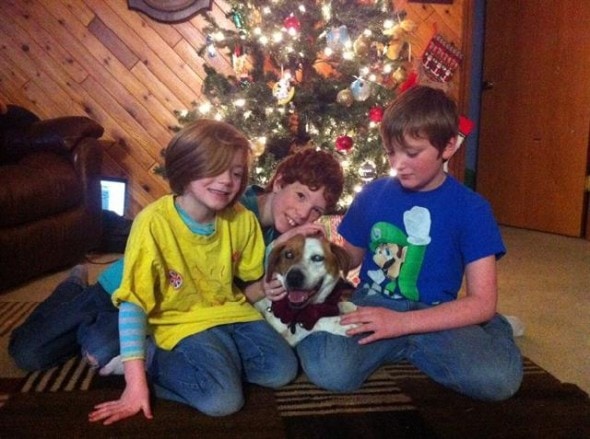 It was -40 degrees and the blind 8 year old dog was lost in the Alaska wilderness, with not much hope for survival.  But against all odds, Abby, a brown-and-white mixed breed managed to walk 10 miles where she found herself in a local mushers dog yard and was finally rescued.

She went missing on December 13th, and because she was blind and it was so cold, it was hard to imagine her getting back alive but that’s how Christmas miracles are made.  Her family, which includes 3 children under the age of ten, are ecstatic to have their friend back.  “It’s a miracle, there’s no other words to describe it,” said McKenzie Grapengeter, emotion choking her voice and tears coming to her eyes. “We never expected to have her to be returned safe and alive.”

Abby was rescued from a shelter as a puppy and has been with the Grapengeter’s ever since.  Musher Mark May saw the dog on the trail on December 19th but had a big team and couldn’t pick her up.  She followed his scent though and the next day appeared at his front door. “Everybody just assumed it was some kind of scaredy-cat, but there it was in front of the door in our dog lot and it was blind,” May said. “It was sitting there, all the way from 14 mile on the winter trail down into this neighbourhood, I guess by just sniffing, so I picked it up and brought it in.”

Somehow Abby did not have any frostbite or apparent injuries despite her time alone in the cold.  Abby wasn’t tagged or microchipped but social media was instrumental in reuniting her with her owners and they are extremely happy and thankful to have her back.   “We’re so, so grateful for all (the community’s) hard work,” McKenzie Grapengeter said. “They’ve given us the most amazing Christmas gift we could ever ask for.”