Dog’s life saved by good samaritan after being shot 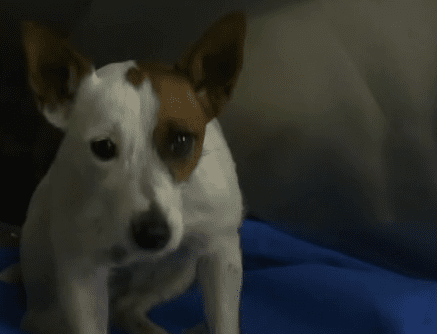 On the day before Christmas eve, on a dark street in Missouri, a dog was shot and left to die.  Fortunately, a passerby found the injured animal bleeding on the sidewalk and brought him to an animal hospital where life saving surgery was performed.  The dog, a jack russell terrier, is doing well and authorities are trying to track down his owners as he had no tags on him.

“When he came in he was bleeding, he was covered in blood,” said Gary Silverglat of M’Shoogy’s Animal Rescue in Savannah.  The shot was from a .22 caliber gun, in Andrew County between 5 and 7 pm Sunday evening.  “We get this constantly, but right at Christmas time, the person who did this is a real creep, great macho support to go shoot some helpless animal. It’s is inexcusable,” said Silverglat.

Local dog owners like Brian Mooney are understandably concerned about the incident. “You know, animals are a part of our lives they’re just like kids. If they’re going to do that to an animal who says they’re not going to do that to a human,” said Mooney.  “It’s not a small thing you know because you know animals are a living breathing creature.You know they deserve a chance just like us,”  he added.

A $1000 reward s being offered for information leading to an arrest in this case.  If you have information please call 816 324-5824.  Meanwhile, we can all be grateful that there are kid and compassionate people who go out of their way to save the lives of an animal, people like Gary Silverglat and the good samaritan who brought the injured jack russell to M’Shoogy’s and saved his life on Christmas.