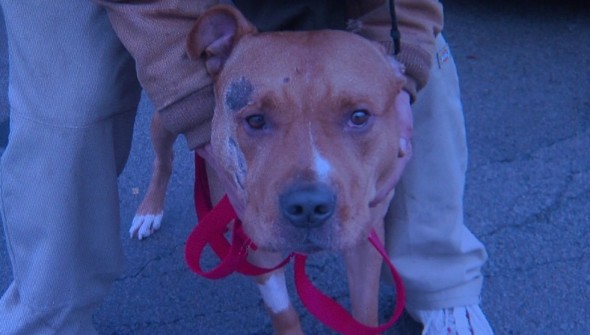 Calling Jean Gottschalk a Good Samaritan would be an understatement, she should really be called an angel.  She was walking down the street in Western New York State when she saw a dog dart into traffic, breaking his leash and getting hit by a car.  It looked bad, “The dog charged out into traffic in front of a car, the woman didn’t have a chance to stop, the dog twisted and rolled under the car,” Gottschalk said. “I really thought the dog was dead.”

The devastated owner of the dog rushed to his aide of his pit bull, named Scooby.  “The dog owner was holding the dog, saying, ‘The dog is all I have, if anything happens to him, I don’t know what I’ll do,’” Gottschalk recalled.  Gottschalk drove the pair to an animal hospital where Scooby was treated by veterinarian Dr. Gerald Balonek.  “The big problem was getting air into his lungs,” Balonek said. “Through all the procedures, Scooby remained calm.”

Fortunately Scooby is a tough dog, and after 2 days he was ready to return home to his grateful owner.  Ever the angel, Gottschalk drove Scooby’s owner to pick him up and let him in on another surprise.  Aware that he was not very well off, she and her friends had generously made donations to pay for Scooby’s treatment, and they were also helped out by All 4 Pets of Western New York. Scooby’s grateful owner was speechless, and thrilled to have Scooby back at his side.

As for Jean Gottschalk, his angel, “I’ve got some of the best friends in the world and that makes my Christmas a lot merrier,” she said.