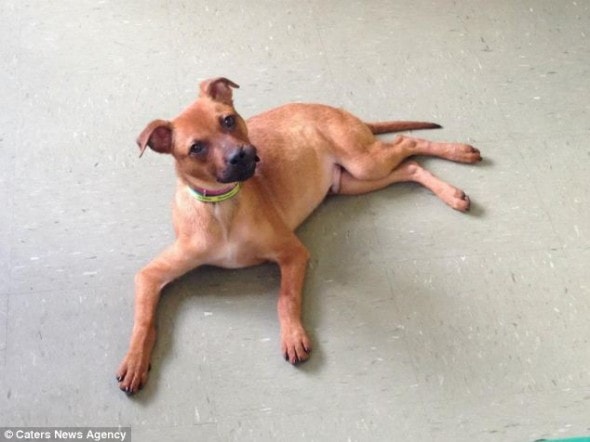 It’s the greatest Christmas gift an abandoned dog could hope for; a new home in time for the holidays.  Sammi, a Staffi-cross was found wandering the streets of Birmingham a few months ago, so thin his ribs were protruding.  He weighed about 12 pounds at the time, and staff at the Birmingham Dogs’ Home were horrified by his condition.

‘We think someone had just abandoned him on the street after deciding they didn’t want him,” said staff member Alayna Warner.  ‘The poor thing was so thin – it was heart-breaking. He was very nervous at first, but obviously a friendly dog, as it wasn’t long before his cheeky personality started to shine through.

But now, after months of dedicated care, he is up to a normal weight, has a wonderful disposition, and has gone to his new home.  His owner, Pauline Soloman said “Sammi is a lovely dog and I’m so glad I’ve been able to offer him a loving home.”

Sadly, the Birmingham dogs home is often full and overflowing with abandoned dogs.  “It used to be the case that about half of our dogs had gone missing, and people phoned around looking for them before coming to collect them from us – but in the last 12 months, fewer and fewer owners are coming to us to be reunited with their pets,” says Warner.  She added that people come up with all kinds of reasons that they don’t want their dogs anymore, including saying that the didn’t realize their puppies would grow so big. 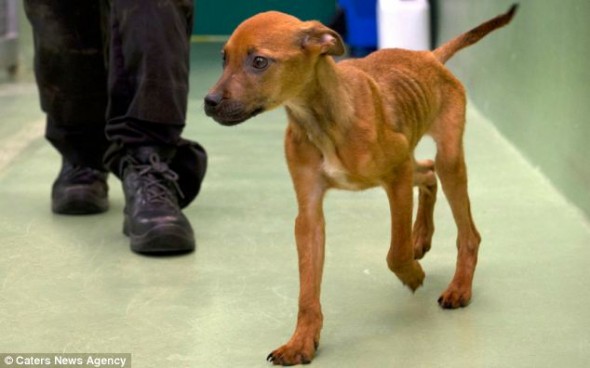 Fortunately for Sammi, he has a happy and loving home to settle into, and indeed he has says Soloman “He’s made himself a little bed on the sofa, and he loves snuggling up there.”  Warner hopes that all of the dogs that come her way are as fortunate as Sammi.