Saying goodbye to Max was one of the hardest things Chloe Brennan has ever faced. The Florida youth was raised with the dog, and her parents say Max offered invaluable support to their daughter when, as a young child, surgeons cut into her tiny chest twice to repair a defective heart. 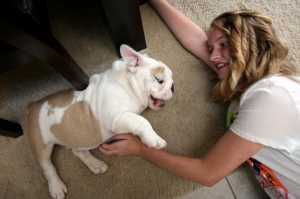 The pediatric heart surgeon who had saved Chloe’s life in early 2000 was Dr. Gary Haas. In August of 2000, Dr. Haas was killed when his SUV overturned in Texas after a tire blowout, and with Chloe’s fragile condition, losing her doctor was no small concern for the Brennan family.

Knowing that Max was Chloe’s support system, they lived in fear of the day that he was no longer there for her. Sadly, on January 20th, that day arrived when Max curled into Erik Brennan’s arm and simply stopped breathing. He had blessed his family with 14 years of unwavering love and devotion.

“Max was Chloe’s best friend,” said her mom. “We knew this would break her heart.”

It did. Chloe was devastated when she got the news the next morning. Max had passed away while she was sleeping. She never had a chance to say goodbye.

Several weeks passed, and as many mourners do, the family went through the motions. Chloe busied herself with activities at Bishop Larkin Catholic School, Erik returned to his job in the Coast Guard, and Andrea Brennan resumed working from home. It was distraction by design, but the distractions helped.

Shortly thereafter, Erik happened upon a classified ad for English bulldog puppies. He called and arranged for a meeting. Andrea said she wasn’t thrilled when the breeder arrived at their home with two squirmy pups: they had yet to be housebroken, and perhaps it was too soon to entertain another dog.

Erik and Andrea noticed that one of the pups seemed obsessed with Chloe. He licked her and Chloe hugged him in a way that reminded them of Max. They all paused as they noticed an wonderful coincidence: a brown marking on the pup’s side was in the shape of a heart.

The breeder, Donna Watkins of Spring Hill, was asked if she had named them. She replied in the affirmative: one pup was named Big Joe. The pup in Chloe’s arms had been named Haas.

“I thought, oh my God,” recalled Andrea. “You’ve got to be kidding me. I got goosebumps.” Upon hearing the puppy’s name, Erik turned her as she cried. “Honey,” he said, “I think we’ve found a new dog.”

As he watched Chloe laughing, Erik said he was astounded at the coincidence: “A Haas has once again fixed her broken heart.”

Haas has quickly established himself as a much adored member of the Brennan family. He recently demonstrated a remarkable sense of adventure when he took a ride on a skateboard. Erik captured the moment on video to share with friends.

Andrea is convinced that everything happens for a reason, and smiles as she watches her daughter beaming and enjoying a carefree childhood moment, bouncing with Haas on the family’s backyard trampoline.

As Chloe bonds with her new best friend, she never forgets the one who stood by her all those years, through the toughest of times. It’s an admittedly bittersweet transition. And while time will heal the pain of loss, it will never erase the memories Chloe built with her beloved dog: she now wears a necklace with a sterling paw. It contains some of Max’s ashes, and will keep him close to her heart.